Articles Analytics Apple iPad (2017): to buy, or not to buy - that is...
ArticlesAnalytics

When I wrote the last article about the Nokia 3310, I watched one old video from the iPad presentation. In the distant 2010, speaking at a press conference in San Francisco, Steve Jobs said: “All of us now use laptops and smartphones. But recently the question arose whether there is a place between them for some third device.”

Then he tried to let everyone know that the tablets should take this place. We must admit that for a long time tablets from Apple and other manufacturers have been successful. Especially popular were the products of the guys from Cupertino. They looked chic, they were smart and productive. It seemed that a little more, and the post-PC era, about which Steve Jobs spoke, is about to come. The iPad was updated every year, their popularity grew, everyone, holding their breath, waited for what would be interesting in the new iPad. But time passed, and the consumer more and more understood that everything is in place, that the tablet, bought a couple of years ago, almost does not differ from the new iPad. Well, okay, there’s a new processor, a different screen or size, the weight of the device, a new iOS. But nothing new is radically new. Users gradually stopped buying new items from Apple. Why change something that works so well? Analysts have repeatedly said that the tablet market reached its peak in 2014. 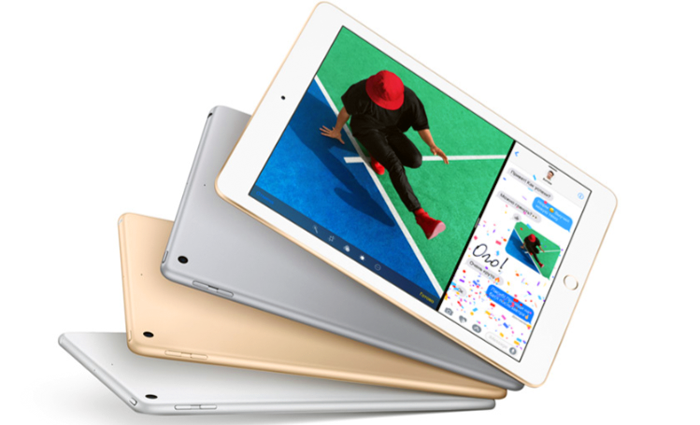 Initially, the presentation of tablets the company devoted entire events, Steve personally represented them. Later they were combined with presentations of other new products and products from Apple. March 21, 2017 happened something that had never happened before: Apple quietly, “without dust and noise,” updated its line of iPad. It is worth recalling that until this day there were a lot of rumors and speculation. All waited for three new tablets: “frameless” 10.5-inch and updated to 12.9 and 9.7 inches Pro. But instead we saw one iPad (2017), which will take a place under the iPad Pro, replacing the iPad Air 2.

What has been presented to us?

The new tablet was introduced to the world, which was simply called the iPad. The company immediately hinted that the novelty is positioned as its most affordable tablet in history. The new iPad received a Retina display (2048×1536 pixels) and an A9 processor with an M9 coprocessor. The tablet also received cameras at 8 megapixels and 1.2 megapixels, a fingerprint reader with a Touch ID and a thickness of 7.5 mm. The iPad has become thicker and heavier, which is important when you compare devices in a store. On the characteristics pay attention later, but in the beginning there are tactile sensations. The tablet will be with 32 or 128 GB of memory, with Wi-Fi or Wi-Fi + LTE. Well, the price. It particularly pleased consumers: the younger models with 32 GB of memory and support for Wi-Fi, and with 32 GB of memory and support for LTE, cost $ 329 and $ 459, respectively. 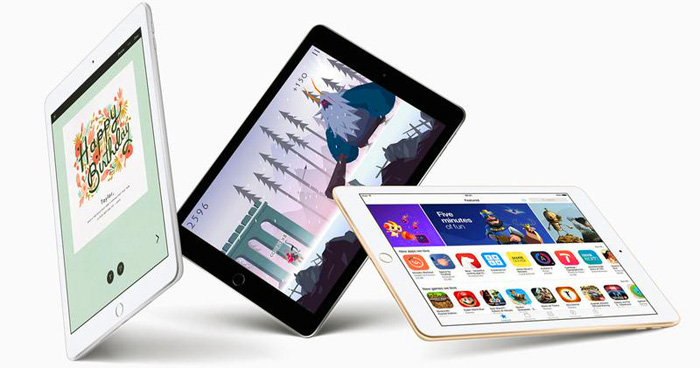 Everyone immediately started talking about the fact that this tablet came to replace the iPad Air 2, which disappeared from the Apple store. I always wondered why Apple has not updated its iPad Air line for so long, because, according to Localystics, it’s this series that is the most popular among the manufacturer’s tablets.

I would like to share with you my vision of whether you need this tablet in 2017, is it worth it to spend money if you already have an iPad or a tablet from another manufacturer.

«IPad is the most popular tablet in the world. Customers like its large 9.7-inch display, which they use for a variety of tasks: it is convenient to watch TV shows and movies, work on the Internet, make calls on FaceTime, view photos. And now the iPad is even more affordable, “said Philip Schiller, Apple’s senior vice president of product marketing. “Both new users and those who want to update their iPad will no doubt like using it at home, at school and at work. It is equipped with an excellent display Retina, our powerful processor A9 and opens access to more than 1.3 million applications created specifically for it.»

It would seem that you can not say better. But is it really so?

The main advantage of the iPad (2017) is its price. This is true if compared with other Apple tablets. The purchase will cost you $ 329. But is it so little? I do not want to say that you can buy a good laptop for this money, you know it without me. I’m wondering if customers are willing to pay this amount for the tablet, which you might not need.

Note that the new tablet installed a 2-core A9 CPU with a clock speed of 1.85 GHz and a microcontroller M9. The same CPU is on the iPhone SE. Maybe it’s good and productive. But this is not Apple’s new processor. The first thing that came to mind: they cleaned the warehouse of the remaining processors? Probably such processors were stuck in the company’s warehouses. I do not believe that it was specially released for the tablet. 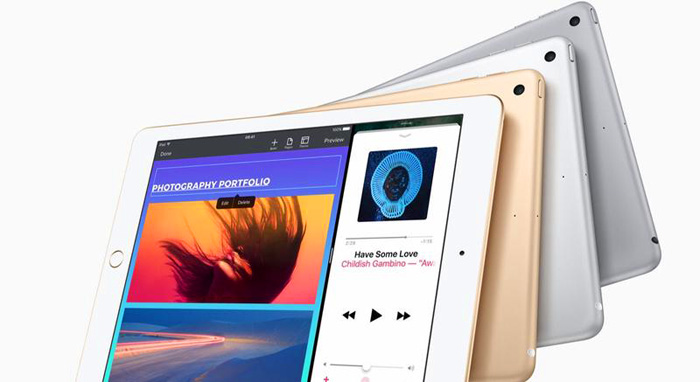 Especially since the company presented a new CPU A10 in the fall, iPhone 7/7 Plus is working on it. And apparently, this processor is much better than A9. And lately there are rumors that the iPhone 8 (or whatever it will be called) will work on the new A11 CPU. Why not use the A10? Why it was impossible to supply the new iPad with it? For me it remained a mystery. Maybe later we’ll get an explanatory explanation for this act, but that’s afterwards.

Batteries have a habit of aging

Began to notice that your iPad should be charged more often, that charging is not enough as before? It’s no secret that any battery has a “habit” of aging. So they are arranged, that over time they lose their properties. 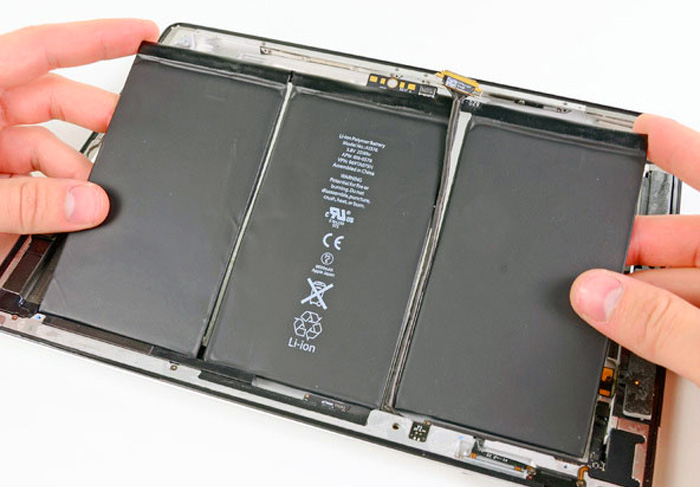 Experts say that the life of any battery is not more than three years. Naturally, the old tablets already have obsolete batteries. It is rather difficult and relatively expensive to change them. For the sake of interest even asked in the service center – basically such repairs will cost you at least $100 plus work.

Of course, the new iPad (2017) has a new modern battery with a capacity of at least 7500 mAh. This is almost the main advantage over other Apple tablets.

Support of the latest iOS version

There is another big plus for the iPad (2017) – it’s support for the latest version of iOS and all its chips. But the world of Apple is changing, evolving. There are a lot of users, Apple fans who buy new smartphones because of the fact that there is a new mobile operating system. And there are quite a few of them. Some of them often complained that over and over again some tablets did not receive support for the latest versions of iOS. 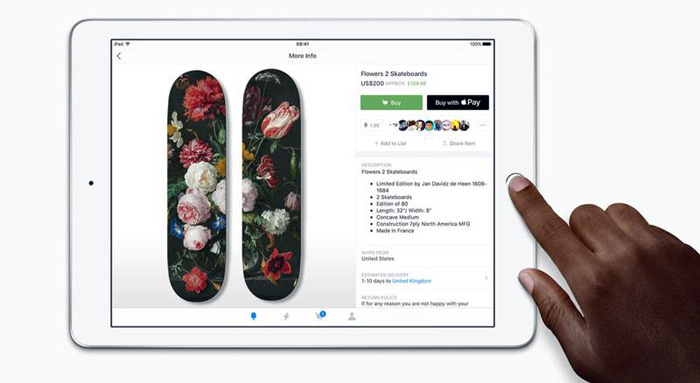 Another important fact in favor of the updated OS is the elimination of vulnerabilities. The company, releasing a new version, of course tries to fix the bugs of the system, errors and failures in the work. This is what operating systems from Apple are famous for.

Someone will say that the previous tablets work well on older versions, they are enough to use comfortably. These users are right in their own way. While everything works, why should something be corrected. It’s no secret that the main purpose of the iPad – surfing the Internet, viewing photos/videos, etc. You do not need to have the latest version of the operating system for this. The main thing is that everything works smoothly and without lags. It is worth noting that in old tablets with this all is wonderful.

This question I asked myself immediately after I saw it. Who will buy it? For whom is it intended? Will it be sold well?

First of all, one must understand that the main market for Apple is Europe and the United States. If we need an iPad tablet to watch favorite movie or series, view photos, videos on YouTube, social networks, then in the USA and Europe for a long time the iPad is used for simple office work, for presentations and webinars. Therefore, if American and European companies want to update their outdated tablets, the iPad (2017) is just what they need. In other words, the buyers of the new tablet will probably be those who want to update the old one or even decide to buy Apple’s tablet for the first time, without finding a worthy option from competitors.

Another area where Apple hopes to succeed is the education sector. I have already written that chromebooks are appearing more and more often in US schools, students are buying them because of the price. And here Apple also provided a new tablet for a very good price for the US and Europe.

Somehow everything turns out too rosy, right? But everything can be exactly the opposite. We all understand that the tablets are slowly losing their relevance. The phone that completely replaced the tablet is quite enough for a modern person. It is possible that this factor will become the main factor. Cases with sales can not go very well. Tablets may not take off. Although you should not underestimate the huge army of fans of Apple products.

As you can see, the release of the new iPad (2017) has both a lot of pluses and minuses. The fact that Apple immediately lowered the price of its tablet, says that the company still has problems in this segment. It’s also sad that I did not understand how they are going to solve it. Whether to buy or not a new Apple tablet is already a personal matter for each of us. As it says, if you really want, then you can.