Our Tronsmart Onyx Neo review of the headset will be uncharacteristically concise for me for one simple reason. Most recently, I tested a similar product – Tronsmart Spunky Beat. And it turned out that these two headsets from the same manufacturer are absolutely identical in terms of characteristics and equipment. 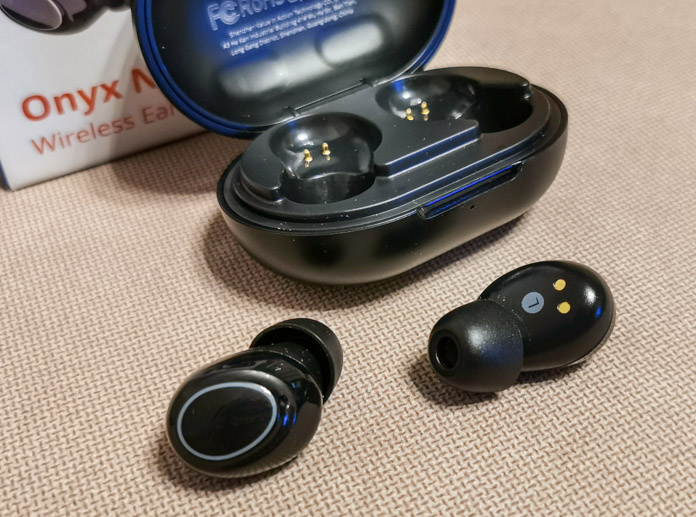 In fact, Onyx Neo is a slightly simplified modification of Spunky Beat. But at the same time, it has some minor improvements. Therefore, I recommend that in the beginning you read the first review in order to understand all the main points. And after that, return to this text to read about the differences between the new model and the old one. In the end, you can definitely decide which headset suits you best. 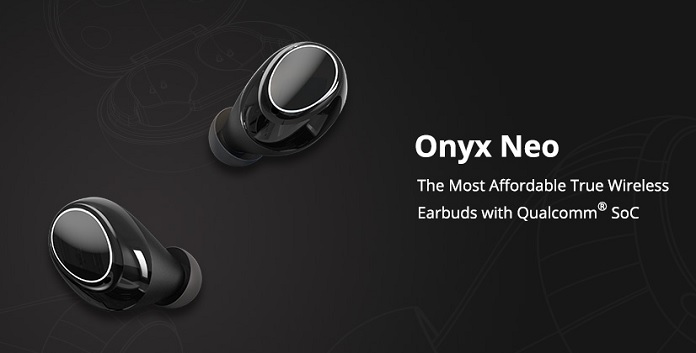 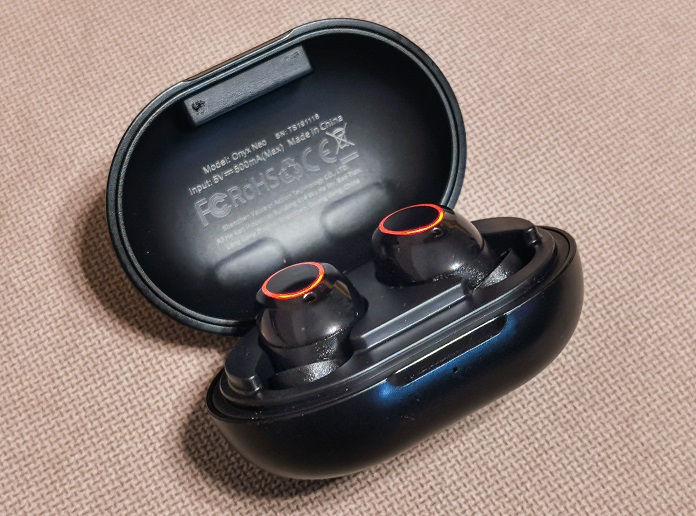 As I said, nominally, Tronsmart Onyx Neo ($23-24) is a simplified and, accordingly, cheaper version of the hit model Tronsmart Spunky Beat ($25-30). The manufacturer does not hide this. But I would not consider the difference of a few dollars a serious incentive to buy. Moreover, the price on AliExpress changes regularly due to constant promotions and sales, so the prices for these headsets are almost the same at the moment. Rather, I would consider the new headset as an option for buyers who value compactness and minimalism above design and excessive functionality. 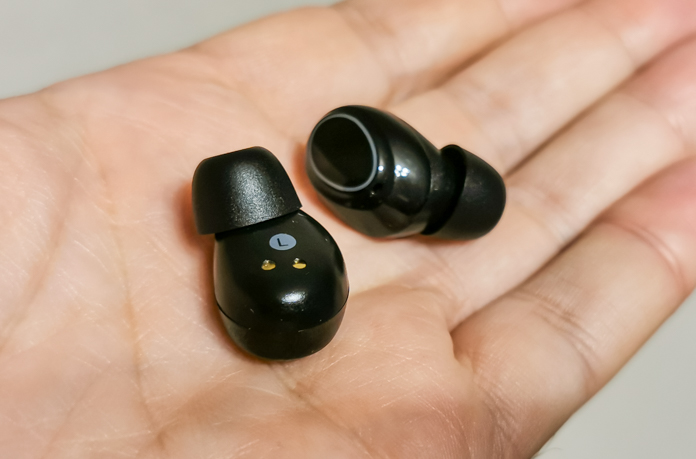 Simplifications begin with packaging. When it comes to design, the boxes are almost identical. But inside, Tronsmart Onyx Neo set is housed in a simple holder made of thin stamped plastic. I remind you about Spunky Beat’s thick multi-layer foam and a stylish cardboard insert – things are definitely not the same here. But the contents are absolutely the same: a case, 2 earphones, a charging cable, 2 additional ear pads of different sizes, and some pieces of paper.

The most important thing. As I expected, Onyx Neo charging case is noticeably more compact because the manufacturer refused the built-in charging cable used in the Spunky Beat case. 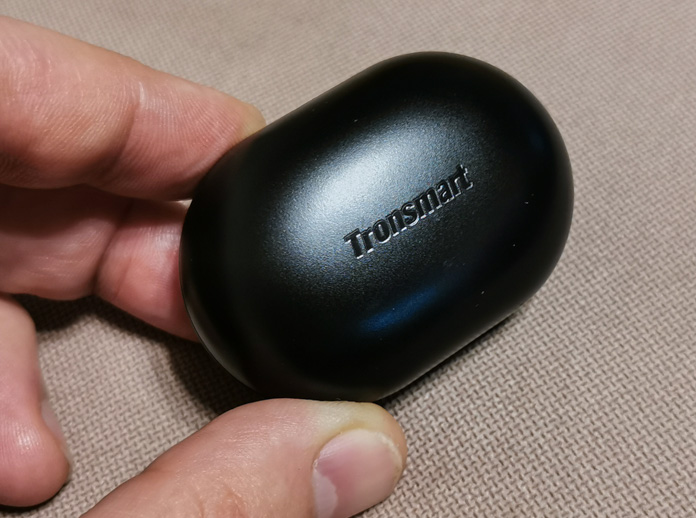 The case can still be charged via the built-in USB-C port. The shape remains the same. 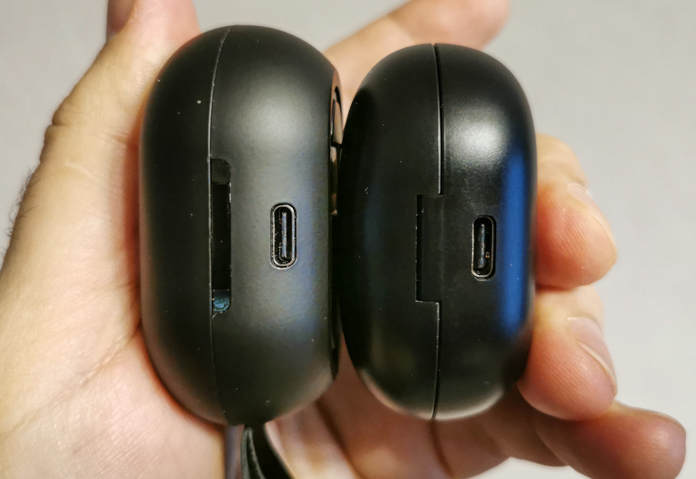 Another noticeable change: we will not find the original dermantine strap here, like we did along the more expensive headset. A small loss. 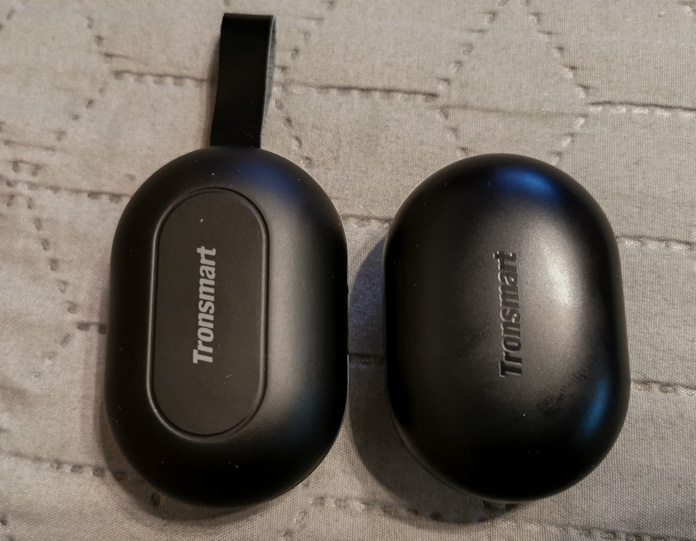 In addition, instead of four LED indicators, only one remained on the case. It glows red when charging and green when the battery is fully charged. It is simply impossible to determine the current battery level of the case. Now this is the real minus of Onyx Neo compared to Spunky Beat. 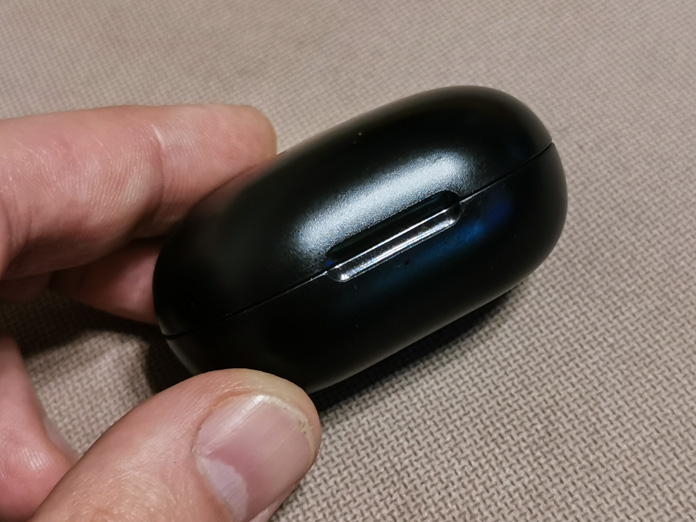 The cases differ in materials. Soft-touch has been replaced with a simple matte plastic. The brand logo is now not printed on the top cover, but is embossed in plastic. 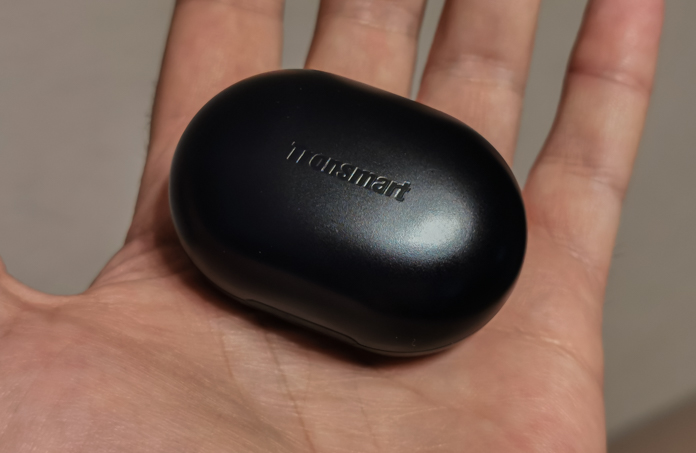 Also, the charging case cover for my specific Tronsmart Onyx Neo has microscopic air gap. Because of this, the case crunches a little if it is squeezed slightly in the hand. This was not the case with Spunky Beat. 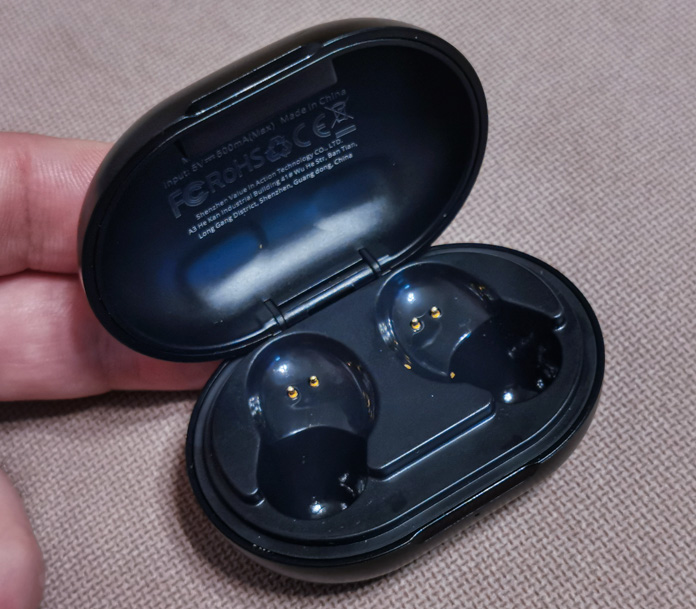 The earbuds of both headsets are exactly the same in shape, size and materials used. The only difference is in the touch pads. Instead of buttons with concentric notches we have a simple glossy plastic. And the shape of the buttons has changed slightly towards a more elongated oval. 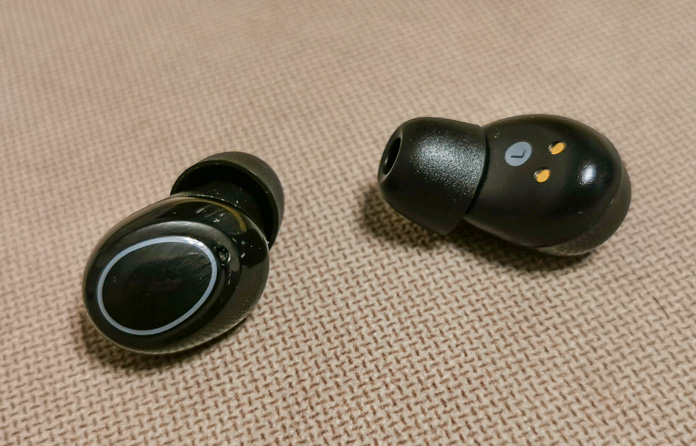 It’s funny that the earbuds of both headsets are interchangeable and fully compatible with any case. You can put Onyx Neo headphones in a case from Spunky Beat and vice versa.

In Onyx Neo, unlike Spunky Beat, the LED indicators on the earbuds no longer flash during operation and are not annoying in the dark. They are active only during charging and in pairing mode. This is another small plus of the new model. Although for someone, this may seem a minus. Decide for yourself.

All the shortcomings and bugs of the touch controls that I described in the Spunky Beat review, unfortunately, remain. But the algorithm of actions has been changed. Therefore, there are fewer errors. 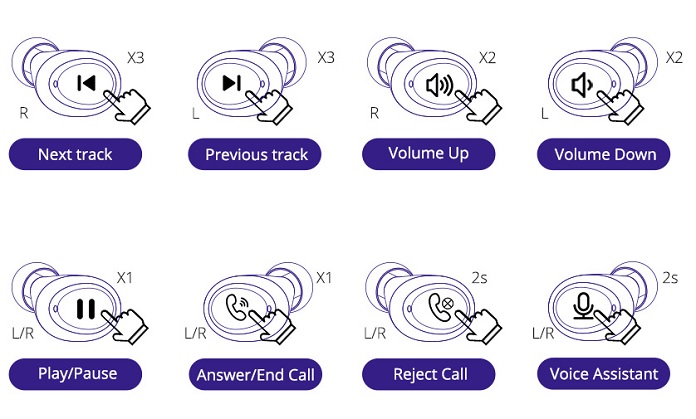 I also note that controlling has become more logical in terms of orientation in space. For example, the right earphone is responsible for increasing the volume in Onyx Neo, and not the left one, as in Spunky Beat. The next track is also on the right.

A long press (hold for 2 seconds) in Onyx Neo is reserved for launching the voice assistant. Therefore, it is almost impossible to call it by accident. And in Spunky Beat this happens often (because this action controls the volume there), and music playback is paused, which is especially annoying.

This section will be short, because I see no reason to repeat myself. From the point of view of ergonomics, everything is similar to the older model. The headset fits perfectly in my ears.

Perhaps because of the reduction in the size of the case, it became more convenient to carry it in your pocket. And Spunky Beat’s charging case was rather big. And onyx Neo came close to the dimensions of Samsung Galaxy Buds, which is very good indeed.

In the aspects of connecting to a smartphone, communication, delays, sound quality and active noise reduction during conversations absolutely nothing has changed, at least in my opinion. Read the relevant sections in the Tronsmart Spunky Beat review. 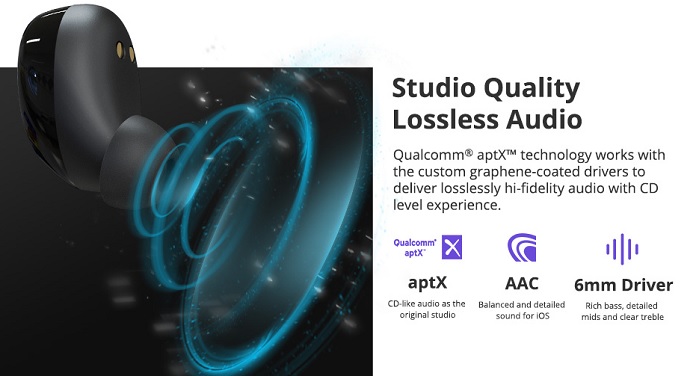 Here nothing has changed as well. Although the dimensions of the case have decreased, the manufacturer has achieved this logical “simplification” by eliminating the “extra” elements like the built-in cable and strap. 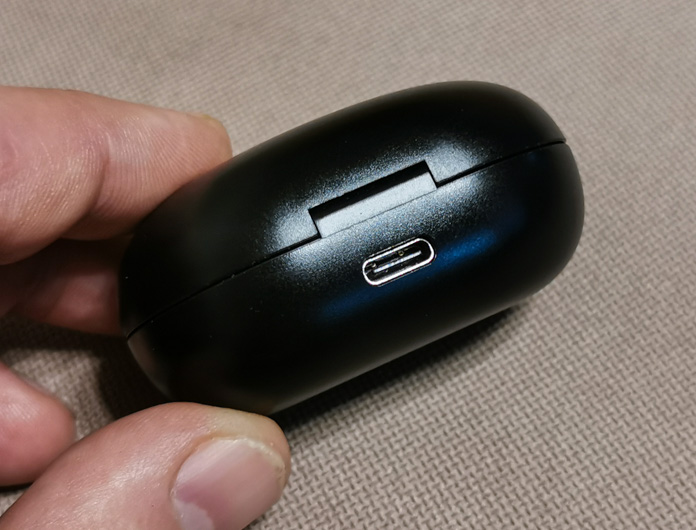 The battery life of Tronsmart Onyx Neo headset is 4-5 hours on one full charge when using aptX codec. On SBC and with 50% volume, the manufacturer promises up to 7 hours. And about 4 times they can be charged from the case. It’s stated that the headset has 90 days standby time. I did not check, but according to my feelings, the self-discharge of the case is minimal. 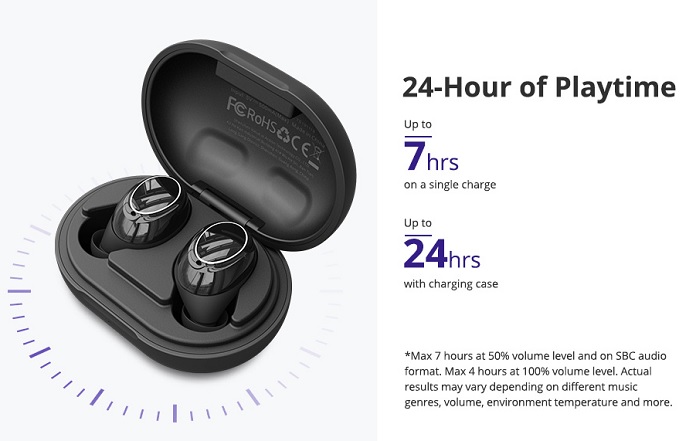 Yes, now the charge level of the case cannot be determined in any way, so you have to control this moment intuitively. I just try to recharge the dock every 2-3 days, but you will need to work out your schedule depending on the intensity of use. And this lack of information is a real flaw. As for the current level of charge of the earbuds, an indicator is available in the status bar of the smartphone during active connection.

Most importantly, Tronsmart Onyx Neo headset has retained all the main advantages of the senior Spunky Beat model – excellent sound, full control, noise reduction during conversations and a reliable connection with your smartphone. 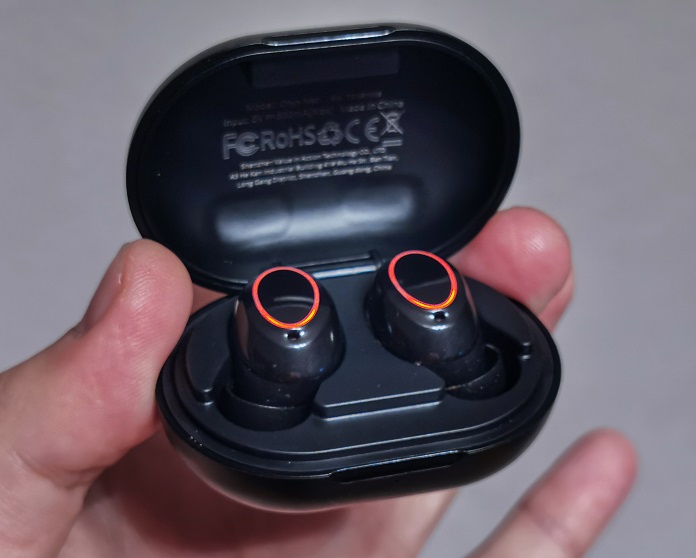 The Qualcomm chip and the use of the “audiophile” aptX codec are complemented by good battery life. Most importantly, the new headset has become more compact. And the touch control bugs, although not completely fixed, are now less annoying due to a more logical algorithm of actions. 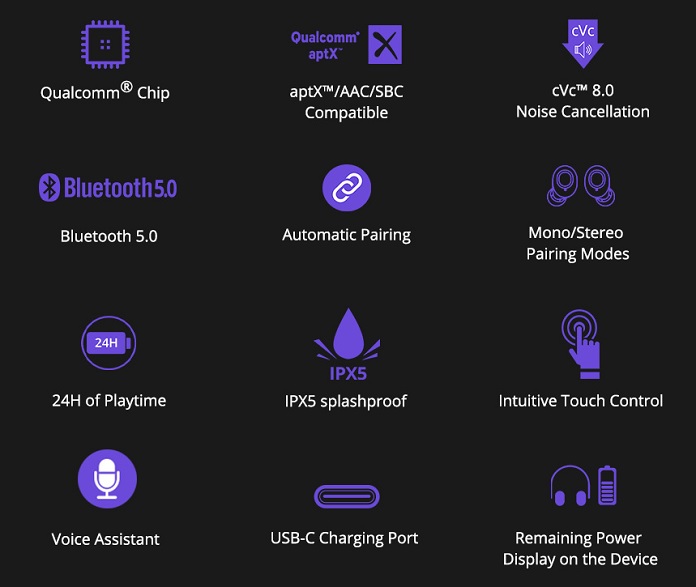 For me personally, all these changes mean that I will personally use Onyx Neo and give Spunky Beat to a friend. You should understand that headsets are almost identical. Even though the senior model looks a bit more presentable, tells you the charge level of the case, and has a built-in USB cable. Both headsets are very good, I can recommend any of them. I hope that my review will help you make an informed choice between these two options.