The differences and similarities between iPhone 12, 12 Pro, 12 Pro Max, and 12 mini. How to choose a new iPhone

The iPhone 12, Apple’s most anticipated smartphone in recent years, has been introduced in four different versions. What are the differences and similarities between them?

As you may recall, Apple previously usually announced two or three new iPhones at its annual fall events, but this year the iPhone 12 lineup consists of four new models – iPhone 12 mini, iPhone 12, iPhone 12 Pro, and iPhone 12 Pro Max. From the smallest iPhone in recent years to the largest ever, Apple’s new 12 lineup has something for everyone, with all models coming very soon. While all four iPhone 12s have a lot in common, there are also some key differences that will influence your decision to buy either of them. But first, let’s find out how smartphones are similar to each other.

What each iPhone 12 has in common

While the iPhone 12 phones are the first iOS phones to support 5G networks, they can also quickly switch between 5G and 4G using Smart Data mode. If you’re doing particularly network-intensive tasks like live streaming or multiplayer games, your iPhone 12 will automatically switch to 5G. 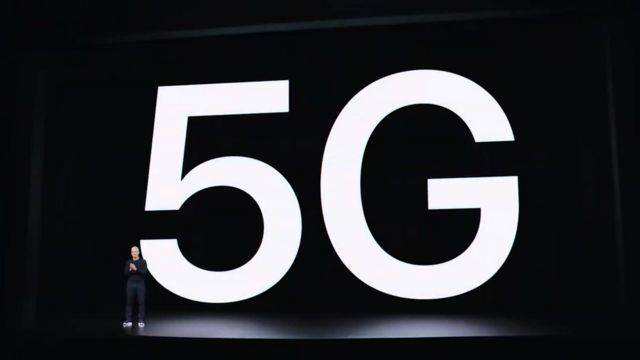 After you are done and want to text someone or stream music, which are much less demanding tasks, your iPhone will switch to 4G again. By using the appropriate network for each task, Smart Data Mode should provide you with longer battery life.

All four iPhone 12s use Apple’s new A14 Bionic processor. This is the company’s first SoC based on the 5nm process technology. The A14 boasts a 6-core chipset, 4-core graphics accelerator and 16-core Neural Engine, which is responsible for artificial intelligence and machine learning. The system is equipped with 11.8 billion transistors. 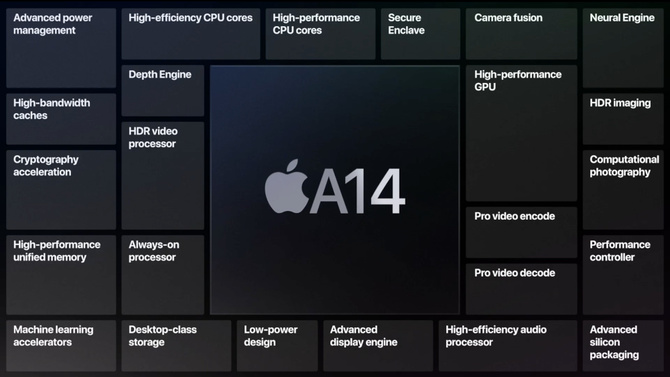 It is difficult for an ordinary user to imagine the fact that a microcircuit can perform up to 11 trillion operations per second. All of this will greatly simplify the process of editing 4K footage and other complex tasks. If we compare the A14 Bionic with its predecessor, then it is one and a half times more powerful than it. There are no benchmarks yet for the A14 Bionic against the competition, but according to Apple, this is one of the most powerful chipsets on the market.

Although the new iPhone 12 come in a variety of screen sizes, they all feature a color reproduction technology called Super Retina XDR (Extreme Dynamic Range). This is to ensure that screens can reproduce a wide range of natural colors simultaneously in photographs and videos – from faces hidden in shadows to landscapes illuminated by bright sunlight and other animate and inanimate objects. 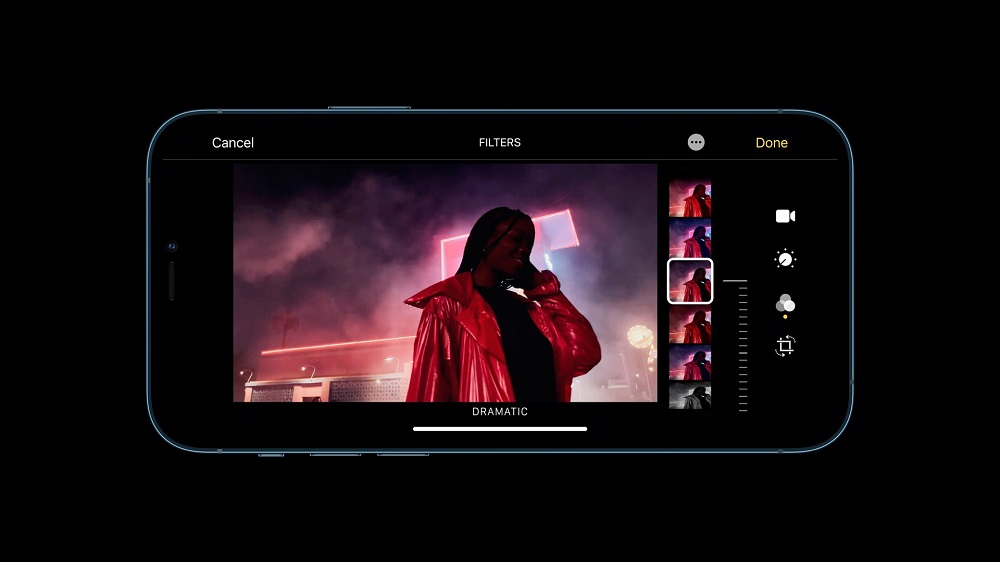 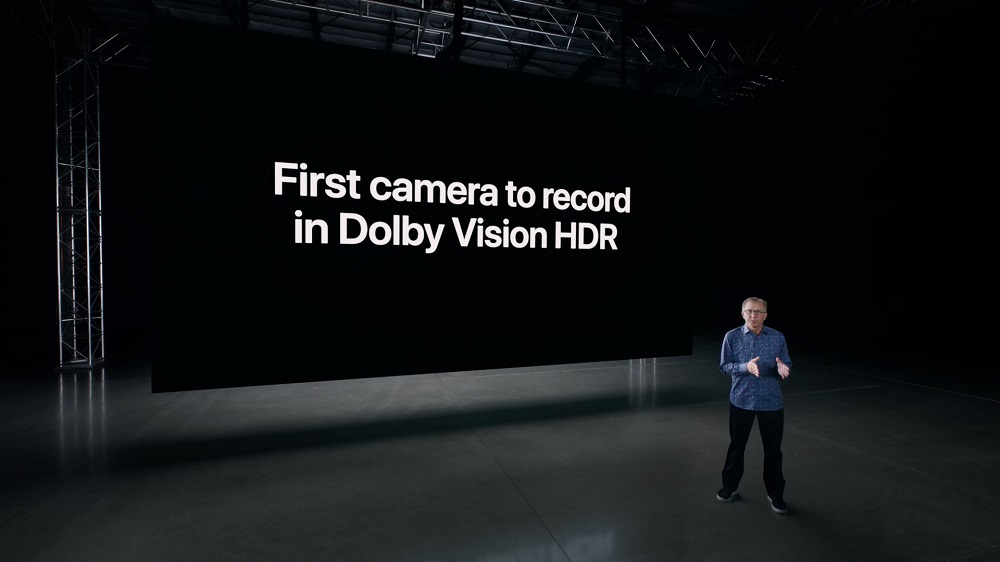 Unlike last year’s iPhone 11 lineup, all models in the iPhone 12 lineup feature a display that uses OLED (organic light-emitting diode) technology. Compared to other display technologies, this results in higher contrast and darker blacks in photos, videos and games.

Also, all iPhone 12 screens have a special Ceramic Shield coating to reduce the chance of screen damage if accidentally dropped on a hard surface.

All iOS phones since the iPhone 8 have built-in wireless charging, but the iPhone 12 lineup improves on this technology significantly.

Existing wireless chargers require the back of mobile devices to be close enough to the charging cells below the surface of the charger for charging to begin. I’m sure you are familiar with the frequent cases when, after a night walk, you put your smartphone on a wireless charger, and in the morning you find it there with a flat battery. The fact is that charging did not start due to incorrect positioning of the device and the lack of proper contact between the smartphone and the wireless charger. In other words, your mobile device either was placed incorrectly on the surface of the charger, or simply slipped off it. 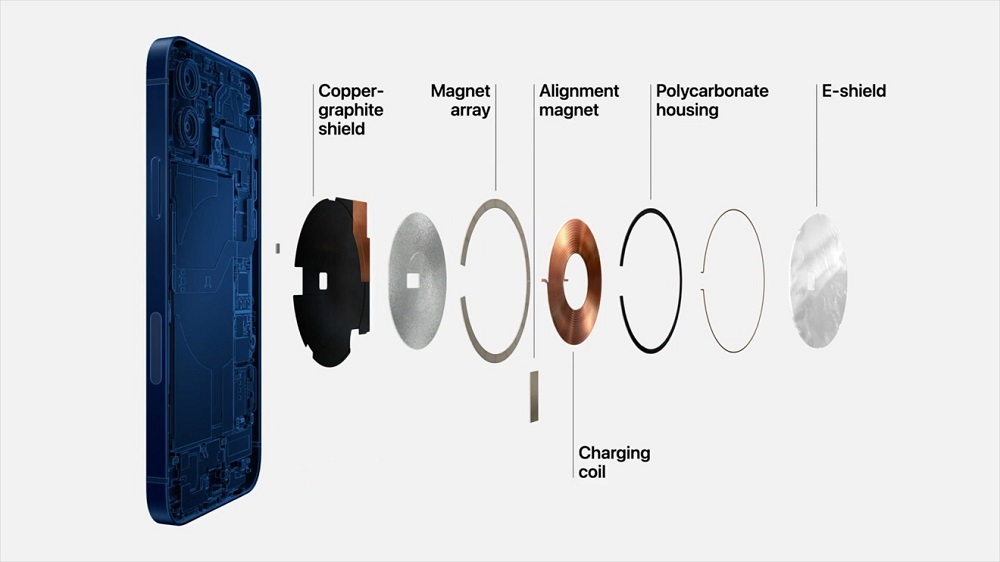 Now the situation will change radically. When the iPhone 12 is used with one of Apple’s optional MagSafe wireless chargers (not to be confused with Apple’s older MagSafe laptop chargers), magnets on the back of the smartphone press it against the charging pads. It does everything for you and starts charging instantly.

Even if you’re not interested in wireless charging, the magnets on the back of every iPhone 12 are compatible with other accessories, such as the special case pocket that magnetically attaches to the phone. Third-party accessory manufacturers are likely to produce a variety of MagSafe-compatible accessories.

Unlike all previous iPhones, the iPhone 12 will not come with headphones or a power adapter. Yes, the absence of the latter is somewhat disappointing. But you must admit that almost every one of us at home has a power adapter from an old iPhone, and you can buy one additionally. Also, there is a Lightning-to-USB-C charging cable in the set, so there shouldn’t be any problems with charging. Perhaps very soon competitors will also go the same way. We all remember the buzz when Apple decided to ditch the 3.5mm wired headphone jack. And now it’s no longer surprising with even Android phones.

What makes each iPhone 12 unique

The most obvious difference between the iPhone 12 models is their size. The iPhone 12 mini has a 5.4-inch screen, and it  is the smallest iPhone currently available. Thanks to its thin bezels, it’s actually shorter and narrower than the current iPhone SE, which has a smaller, 4.7-inch screen. That alone could make it the perfect smartphone for many people who have long complained about the increasingly bulky screen sizes of previous iPhones. 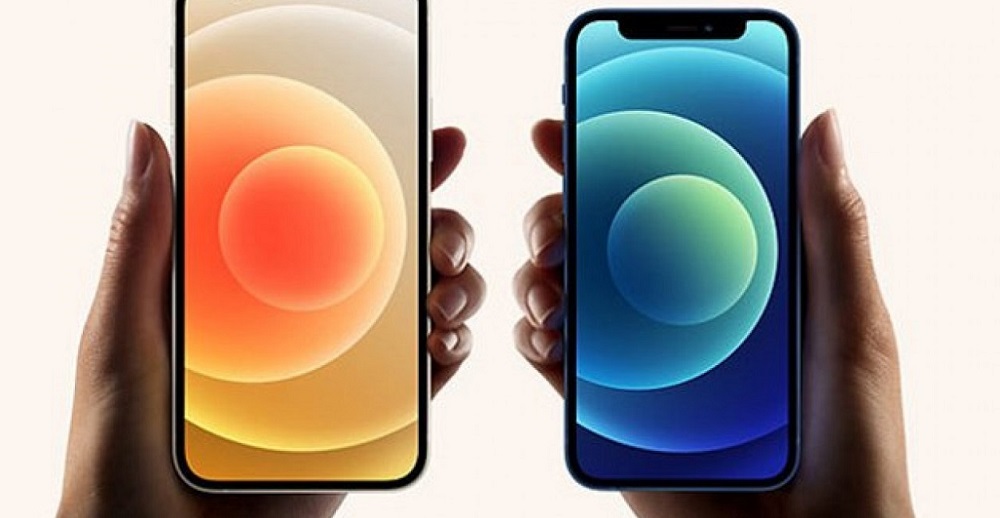 At the other end of the spectrum we have the iPhone 12 Pro Max. This is the largest smartphone Apple has ever introduced. It has a huge 6.7-inch screen. This giant is closing in on the 7.9-inch iPad mini.

In addition to the regular wide-angle lens on the main camera, the iPhone 12 and 12 mini are equipped with an ultra-wide-angle lens for capturing landscapes as well as creative shots.

Compared to the iPhone 11 camera, the general-purpose wide-angle lens here has a wider aperture. This means it can let in more light for better photos in low light conditions. For particularly difficult conditions, there is a dedicated Night Mode that now works with the selfie camera and the ultra-wide lens on the back, but this mode is not available on the wide-angle lens. Night mode works even when shooting videos with a delay.

And the iPhone 12 with the Pro ending have a third lens with 2x optical zoom, which is not available in the iPhone 12 and 12 mini. 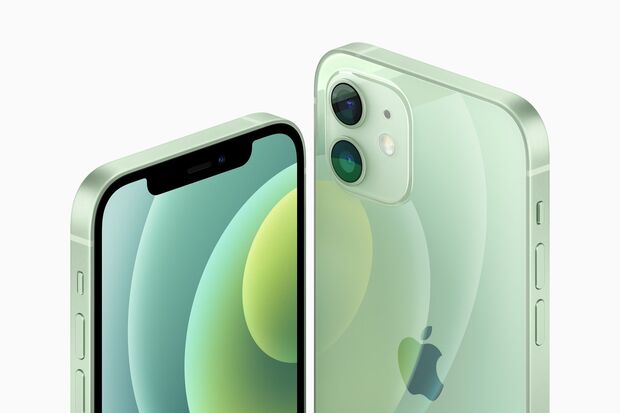 The two Pro models can also shoot and store photos in ProRAW format instead of the more familiar JPEG and HEIF formats. Raw files are preferred by professional photographers as they are composed of clean unprocessed image data recorded by the camera’s sensor.

This gives a lot of flexibility when editing photos in dedicated software such as Photoshop. But by their very nature, standard RAW files lose the tweaks that Apple provides to its cameras, such as night mode.

Thus, ProRAW is a version of Apple’s RAW file that retains both “raw” image data and changes made by hardware and software. This should give photographers the ability to edit their photos with maximum flexibility. 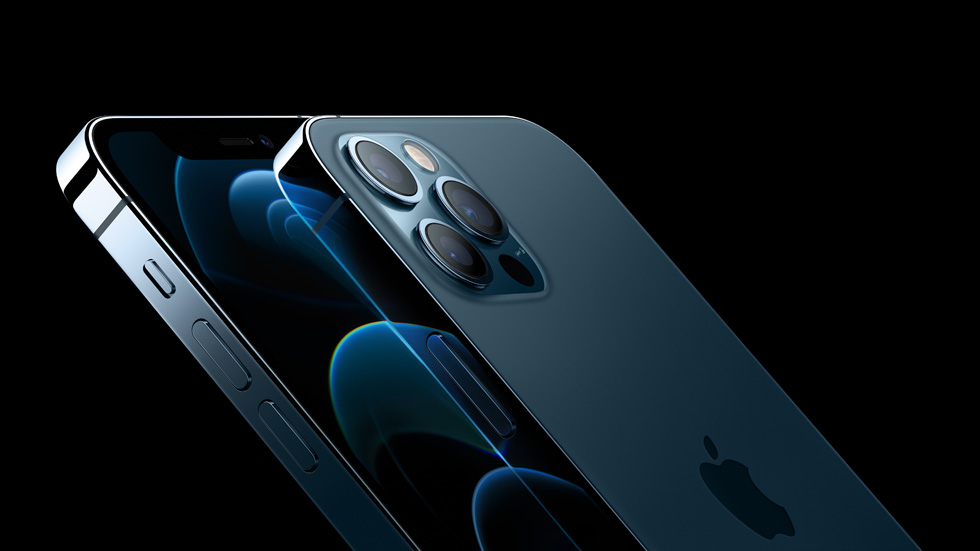 Both iPhone 12 Pros feature LiDAR (laser scanning, object detection and ranging). By using a laser beam to measure the distance between you and your subject, the camera can autofocus faster and more accurately in low light conditions.

iPhone 12 Pro also uses LiDAR for low-light portrait mode. Portrait mode is for taking pictures in which the background behind the person is out of focus to emphasize the main subject more. LiDAR can also have non-photographic uses, such as being used to more accurately place objects in augmented reality applications. You can read more about LiDAR in iPhone 12 in a separate article on our website.

If that’s not enough for you, the 6.7-inch iPhone 12 Pro Max has another component in the camera set that even the iPhone 12 Pro lacks — a second camera sensor. It is larger, which further improves the quality of low-light photography, as it can receive more data in the dark.

The camera sensor on iPhone 12 Pro Max is stabilized to reduce the chance of vibrations from your shaking hands to help you capture a clearer picture. While the iPhone 12 Pro also has optical stabilization on its two rear camera lenses, the presence of a stabilized sensor means the 12 Pro Max can apply stabilization to all of its cameras, including the front selfie lens.

Apple decided that iPhone 12 Pro and Pro Max users needed more storage. Therefore, these smartphones are available with 6GB of RAM and in 128GB, 256GB, 512GB storage options. And the younger standard iPhone 12 and 12 mini received only 4 GB of RAM and versions with 64 GB, 128 GB and 256 GB of storage. 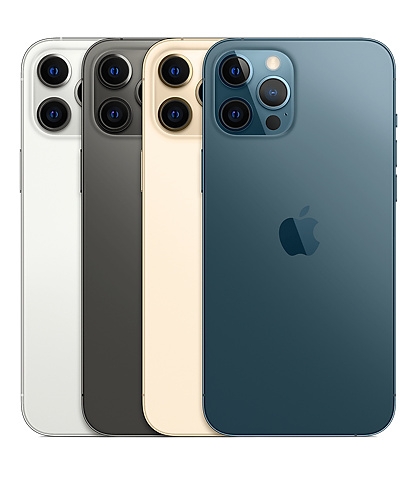 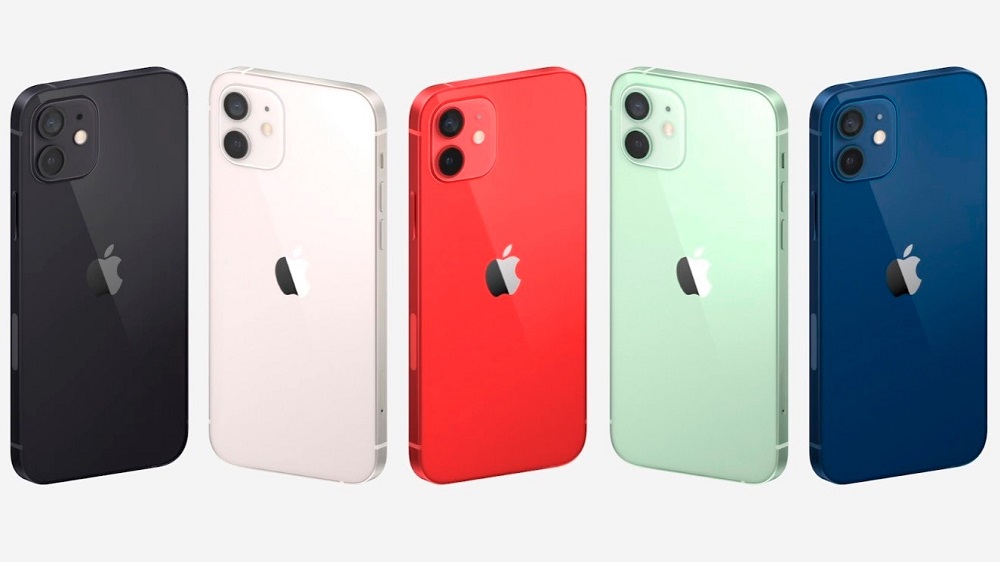 We tried to give you a general overview of the new iPhone 12 smartphones, as well as the main differences between the models. Perhaps our short article will help you when choosing a new iPhone.