It’s good to be a console owner in 2017. The abundance of must-have exclusives, the big number of affordable bundles and, of course, the excitement of a new console. But while Nintendo may have won this spring, Sony is still a king in terms of sales and overall exclusives. The PS4 can already be called their most successful console after the PS2. And Horizon Zero Dawn may as well be its best game.

And its story is fascinating. We expected Uncharted or InFamous, but this? An open world exclusive from the Dutch creators of Killzone? That was unexpected. What’s more surprising it just how good it is. Where have they been all these years? Why make one mediocre shooter after another when you have this much potential? For years Guerilla Games have been working on Killzone for PS2, PS3 and PS4. PS Vita got its version from Guerilla Cambridge – ironically one of the best games of the franchise. 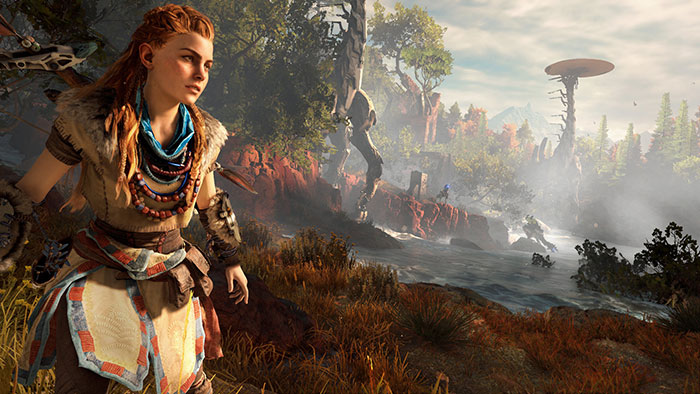 But Killzone is no more – at least for now. Horizon Zero Dawn is something completely new – a brave new world for developers who grew tired of the same old tropes. In fact, there are almost no similarities between the games. Killzone is a traditional first person shooter and Horizon Zero Dawn is an open world third person RPG about hunting huge robotic dinosaurs. The idea is both bizarre and brilliant. From the moment it was announced in 2015 I couldn’t wait to play it. Finally, I can, and it’s everything I wanted it to be. Forget the misplaced hype about No Man’s Sky and Mass Effect: Andromeda – Horizon Zero Dawn tells no lies. It is every bit as epic and beautiful as we were promised.

Horizon Zero Dawn is a post-apocalyptic game – a common theme in gaming – but it’s different from others like Fallout and The Last of Us. In fact, this is a post-post-post-apocalyptic game where events take place after hundreds, if not thousands, years after the initial catastrophe. Our civilization is no more and no one knows exactly what happened. The world we see has remnants of a bygone era, but ancient cities and machinery have long merged with the scenery. And what scenery it is: lush forests, bright deserts, freezing mountaintops. Since the Witcher 3 I haven’t seen world as dashing as this. Come to think of it, Horizon Zero Dawn may even be more impressive. But more on that later.

People are in the center of the story. The civilization had been wiped out, but humans survived. They are a lot less developed: they live in tribes, believe in different deities and go to war with bows and arrows. But these are our ancestors, no doubt about that: they are bloodthirsty and they have their own history of massacres. Even after all this, humanity doesn’t change. But it doesn’t mean we don’t deserve a chance, say the developers in the Netherlands. That is the main theme here, conveyed through its charming protagonist Eloy. 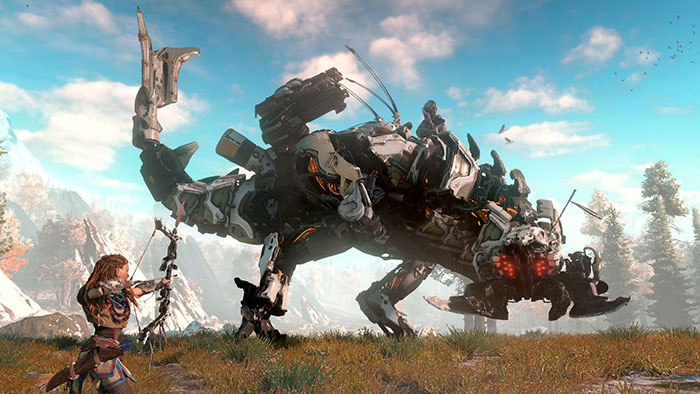 She is, no doubt, one the most delightful and cute heroes I’ve ever seen. Eloy is a huntress who has to fight for her life since her birth. She was cast out of the tribe from early ages because her mother (probably) abandoned her. Yeah, what a pleasant world this is. But she learns how to fight and survive thanks to her caretaker Rost.

While Eloy is amazing, I won’t deny that she is not completely original. As usual in videogames, she is an unstoppable force, a cunning and compassionate warrior who is always able to help others in need. She hunts down even the biggest machines, cracks any detective cases in her way and never gives up. She is here to move the plot forward, and she does it masterfully. Unlike almost any other character in Horizon Zero Dawn, she isn’t afraid of technology, which she embraced at young age.

She has a special device she calls Focus. The focus helps her to learn about robots, find their weak spots and see the paths hidden to others. In many ways this device makes her better than others, which is oddly comforting for me: it is a logical explanation of why she is so much better than any other hunter in this world. Her open-mindedness is her best weapon.

Horizon Zero Dawn is built on mysteries. We know nothing about this world and we are desperate to learn more. Developers know this and give us as little information as possible in order to keep our interest. This is a great example of good storytelling: there are no intros, no narration, no epic cut scenes in the beginning – even though I expected something like that. At first I was even disappointed – I wanted to know what had happened right away! But then I understood. The mystery, the suspense, are essential. Eloy is a great hero because she wants what we want – information. She learns with us. “Show don’t tell” rule in action.

Yeah, and about other characters. Guerilla Games created a lot of memorable heroes here: a drunken warrior Erend, a naïve but promising Sun-King Avad, mysterious non-corporeal seeker of truth Sylens. I wanted to follow the plot and cared about these people. This is rare for me: I hardly ever care for such things; death scenes and drama in games do not touch me. Here, it’s different. This is no The Last of Us, but that game is not nearly as big and open. And Naught Dog have a lot of experience while Guerilla is new to this.

But what do you do in Horizon Zero Dawn? Well, this is a game about hunting robotic dinosaurs. They are the main stars. There are a lot of them in difference sizes. Not all of them are even dinosaurs – some are downright animals, like deer and turkeys, Yeah, that’s right. This game is even more bizarre than you think. 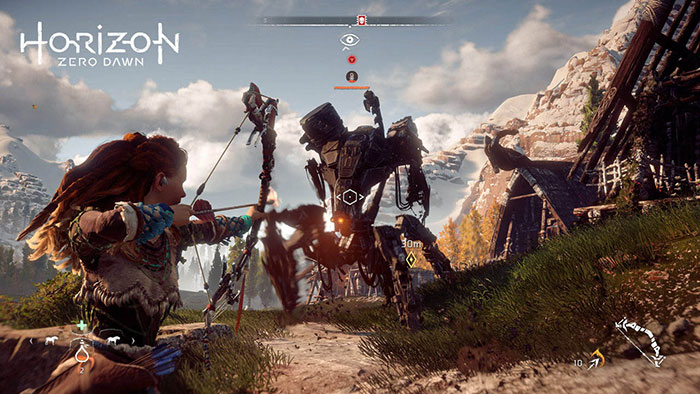 You hunt these robots in different ways. You can be sneaky about it or you can go all guns blazing. I advise the sneaky approach though. Some of this machines can be killed in one shot while others demand a barrage of arrows. Some battles may take you half an hour or even longer. These are stressful, epic battles which test your reaction and ability to make decisions on the move. Some battles you will remember; some will leave you fuming. For the most part, the game is fair, but there are moments when you just want to throw away your controller.

You fight humans too. It was a bit unexpected for me, but when such fighting happens, it’s a nice change of pace, even though some deem such battles unnecessary. When dealing with humans, the game reminds me of Far Cry with its camps and towers.

Eloy has a vast array of special abilities, all of which are upgradable. You can get new gear and armor. Gear is important in Horizon Zero Dawn, but in order to get the best there is you’ll have to get your hands dirty. Battles are great because there are a lot of ways to win. Eloy can use arrows, of course, but there are a different types of arrows. There are also bombs, traps, a ropecaster which helps to pin down targets, and more.

The shooting mechanic is also a lot deeper than I expected. Huge monsters have a lot of hit points. You have to be tactical about it and try and disable specific parts. You can peel off layer after layer until there’s nothing left.

Every enemy leaves something behind, be it a crafting part or shards (money). People usually leave potions and trinkets to be sold for money. The game encourages you kill as many robots as possible in order to get the best gear. This system worked marvelously in Monster Hunter and it works even better here, even though it’s been streamlined a bit.

Graphics is probably the best thing about this game. Horizon Zero Dawn is stunning, using the most of PS4’s power. The game runs flawlessly even on my inferior fat PS4. The picture is crisp and bright with no stutters and slowdowns. The world is vast and beautiful, full with life and history. It’s not empty – everywhere you go there’s something to do. There are side-quests to do, errands to run, collectibles to find. Corrupted zones need cleansing; enemy camps should be destroyed. There are little chores here and usual clichés of big RPGs seem to be mostly avoided.

Sure, some parts of Horizon Zero Dawn remind me of other games. Witcher 3 is an obvious inspiration: there are a lot of Witcher-inspired quests where you need to find missing persons. Eloy sometimes remind me of Gerald with her funny muttering about the weather.

While the weather effects and the scenery are amazing, the characters themselves are not quite so. Eloy is beautiful, sure, but a lot of times the lip-syncing is really bad.  Sometimes the dialogs look nice enough, but oftentimes people speak like animatronics. It’s weird, really, but it’s my only complaint. Still, the face animation is a lot better than in Mass Effect: Andromeda.

One of the best wins here is just how unboring is the whole game, if you pardon me for inventing new words. Even the single act of moving from point A to point B is fascinating thanks to breathtaking scenery and constant threat. You can fast travel, sure, but when you can’t it’s no problem. Sometimes there a huge beast between you and a quest location, and that beasts takes you longer time to slay than the quest itself. Hey, that’s open world for you.

Horizon Zero Dawn is one of the first truly great games of 2017. Release in 2016 would have surely put it in the first place for the Game of the Year awards. This year, with the new Zelda and such, I don’t know. This is one of the most exciting games for PS4, a true gem. Frankly, I’m tired of online multiplayers, MOBAs and others. I miss the good old story-driven games like Dishonored 2, Deus Ex: Human Revolution, Uncharted 4: Thief’s End and so on. These games are still being made, but their low sales really bum me out. Right now, Sony’s consoles are the best place for offline experience and true innovation. I recommend this game for all.

Huawei is one of the few large companies that are still making tablets. The...
>>>

When we were invited to a sneak peak of the juiciest and freshest Samsung...
>>>