The Escapists 2 review for Nintendo Switch

The indie scene has been very successful in 2017. We’ve had great new titles and quality sequels, and The Escapists 2 is no exception. A successful one-off is now a franchise with many fans and a well-known name. But how can it build on it and expand?

The Escapists 2 is a very cautious sequel. It definitely plays it safe in terms of new ideas and concepts. The developer – Team17 – wanted the game to stay recognizable, and changed very little, adding a lot of tweaks and a plethora of new content. For fans, it’s a welcome, if a bit unexciting addition. For newcomers – another reason to get into the unique game about escaping the cutest prisons you’ve ever seen.

The game’s release was in 2017, but it was ported to Nintendo Switch only now. The Switch is arguably the best platform for such a game and will, undoubtedly, become the new “indie machine” after the slow but inevitable demise of PS Vita. To be fair, after the disastrous port of RiME I was a bit worried about lazy ports which could smear the console’s reputation, but, thankfully, that was an exception. Like many others, The Escapists 2 is a good port. But is it a worthy game?

The routine of an inmate

I have to say, even though I wasn’t a devoted fan of the original, I waited for The Escapists 2 with some excitement. The ability to plan your grand escape on the go and play with friends wherever you are sound fantastic. Why would I want to play anywhere else?

The Escapists 2, just like the original, asks of the player just one thing – to find the way out. It is the end goal. Whatever you do, whoever you befriend, all of it serves one purpose.

After a couple of hours of playing, I noticed that I started drawing unusual parallels between The Escapists 2 and other, seemingly unrelated games such as Watch Dogs and Hitman. The first was an example of an open-world game. This genre has become incredibly popular, and we’ve seen a lot of games with a premise of expansive worlds and the ability to do whatever you want. But in reality, there’s nothing “open” about such titles. They have vast worlds, but linear gameplay. Hitman, on the other hand, offers limited space, but almost unlimited number of ways to finish the task.

I feel that The Escapists 2 takes a lot from Hitman. After your avatar materializes in the gaming world, it’s anything goes. You have a goal –  now do whatever you want to archive it. You can meticulously plan your every step or go guns blazing, hoping for a lucky shot and swift escape. It can work either way. Now that is freedom. The freedom to imagine a way out, not to follow a pointer. 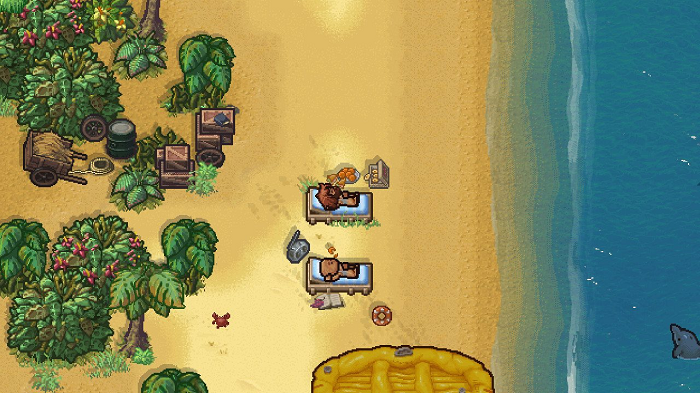 Just like in Hitman, The Escapists 2 puts you into one environment after another and asks to persevere. You have no tips, no pointers or roadmaps. You can either conjure up a plan or get stuck in a monotonous routine forever. Just like real life. Even if there is a tutorial, it’s very rudimental and doesn’t really tell you much. It explains basic mechanics, but how will your guy escape is only up to you.

Start a new game, and you’re instantaneously thrust into the world. You’d better get on with the program or it’s game over. You go wherever they want you to go and do whatever is needed of you. Eat, work, workout, take a shower. Rinse and repeat. Nothing changes in the world. You have to behave just like any other inmate. Skip one of the activities, and the guards will be on the lookout for you.

There’s room for some freedom, of course. While you have to attend the activities, you are free to leave immediately after that. When the whole prison does one thing, you can roam freely, doing whatever. You can help yourself to others’ stuff since all cells stay open. When others start fighting, there’s your chanсe to pickpocket while your co-prisoners lay unconscious. It is risky, since guards don’t like that, but worth a try. Be fast: there won’t be long until the medics arrive and remove the victim. The medics are extremely fast, so learn to be quick as well.

Since the game offers no real help to newcomers, it gets extremely hard real fast. Almost all new players are impatient and want to escape as fast as possible. Fat luck: The Escapists 2 does not allow for impulsive actions. You won’t run from the guards and you won’t find a way out. You have to plan, observe and self-improve.

At the start of the game, your character is puny and stupid. You have to make him work out to become stronger. Reading allows your avatar to improve his intelligence points. Those are important for crafting: all the good stuff requires higher IQ. All of that means that you will have to endure a lot of days until your character will be fit for his escape. Both working out and reading requires you to take part in a basic mini-game, which reminds me a lot of the fishing game in Stardew Valley. 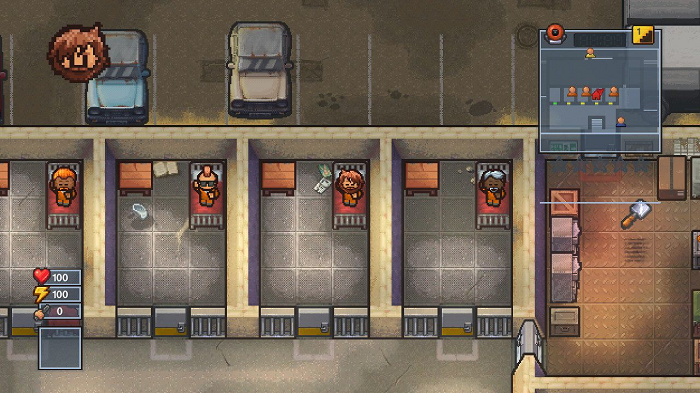 This time can be devoted to not only to self-improvement but also quests. Your character will need money to acquire much-needed tools, and the easiest way to do so is to buy from other inmates. Making money is not that hard: you can work or do stuff for other people.

Finding work is not that easy since all positions will be already taken. Quests, on the other hand, are plentiful. While there’s a lot to do in The Escapists 2, these side activities are rarely all that exciting. Mostly it’s “go there and beat the shit out of that” or “take this and put it there”. Most of the quests are fairly straightforward, while others are a bit too convoluted, asking you to craft multiple items. The reward is rarely worth the risk. 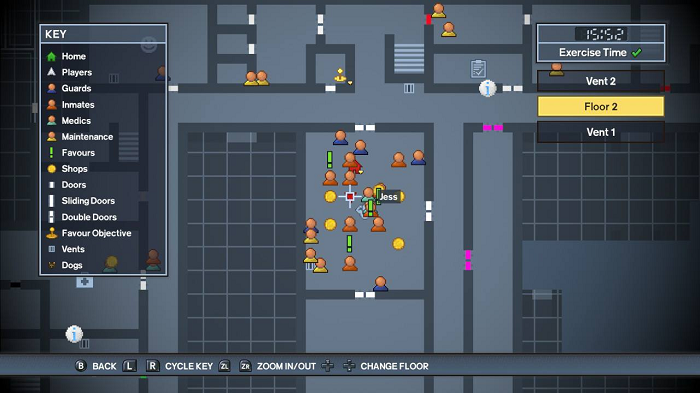 Crafting is actually the crucial part of the game. You won’t get anywhere without the tools, and those are hard to come by in the wild. There are tons of items in The Escapists 2: from forks and socks to handmade weaponry like spears. Sometimes hunting for one ingredient of something particular takes days.

You can not only make tools, but also friends. People will like you for your presents or after you complete a quest. The system is not that deep: for example, I almost killed one inmate with a spear, but after a while, I met him in the hallway, completely unharmed and seemingly friendly towards me.

All of the inmates – as well as the guards – are highly customizable. You can change everybody’s names and appearance, so that you can have a prison full of close friends and relatives or, say, characters from Orange Is The New Black. This reminds me of Xcom games, where the ability to name your soldiers helps a lot with immersion. 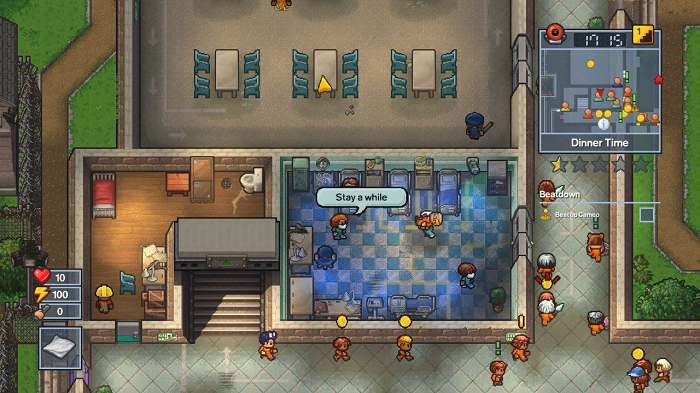 In fact, some of the convicts seem to be already modified after famous YouTubers and streamers. It was really odd meeting the likes of JackSepticeye or CinnamonToastKen, who seemed a bit out of place.

The Escapists 2 is probably the cutest thing about prison you’ll ever see. Everything is adorably pixelated and colorful. The music is, too, upbeat and catchy. It’s a stark contrast between the general theme (and abundant violence that’s in the game) and the way everything looks.

Playing The Escapists 2 on the go seems like a really good idea. It’s great for playing in short bursts, and, thanks to Joy-Cons, is available for local multiplayer anywhere in the world. Sounds great, but actually playing it like that on a small Switch screen is a pain. Even on a big TV playing with a split screen can be bothersome, since too much of the game is hard to see. But still, it’s there and it’s awesome! Online play is still preferable, though. 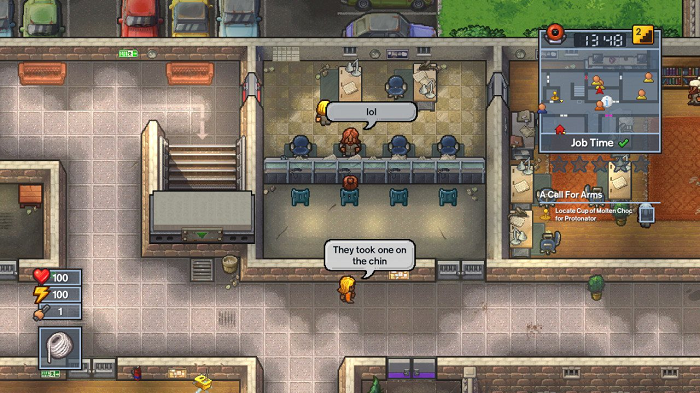 The Escapists 2 is a beast of a game, boasting unique idea, cute art-style and nearly endless replayability. Over and over again, it tests players’ creativity and allows for truly scary moments when everything you’ve worked for is at stake. After dozens of hours, you have a plan and every tool required, but one mistake can cost you everything. It’s stressful and addictive.