Admit it – when you saw these multi-colored beans by the name of Samsung Galaxy Buds Live, you were surprised to say the least. I mean nobody WANTS to copy AirPods, but copying beans? Where does it end? It is very strange… At least that’s what I thought. And then I tried them in action. And now I do not want to give them away. 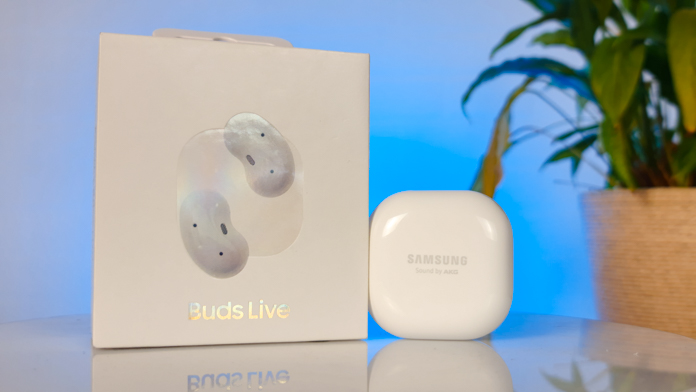 I am a HUGE fan of such headphones. I like nothing better than some Addie Hamilton or DOOM Eternal in my ears. Actually, before Galaxy Buds Live, my daily driver was Huawei FreeLace, which I almost smuggled into my country.

But I tried in-ear earbuds, and gave up on them almost immediately. This format does not suit me, it is not interesting. And this is where Buds Live comes into play. 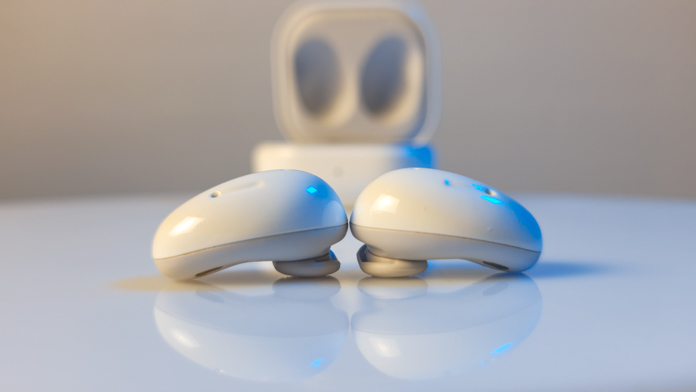 Yes, the headset is not cheap. The price is about $160 although it’s still nothing compared to AirPods (Pro). There is competition in the $150 price segment and it is pretty tight, but Samsung Galaxy Buds Live has no competitors, simply because of the format. Therefore, take it as something new, original and unique. And worth your money.

The box includes, in addition to the headset itself, a charging cable, manuals and spare “ear pads”. 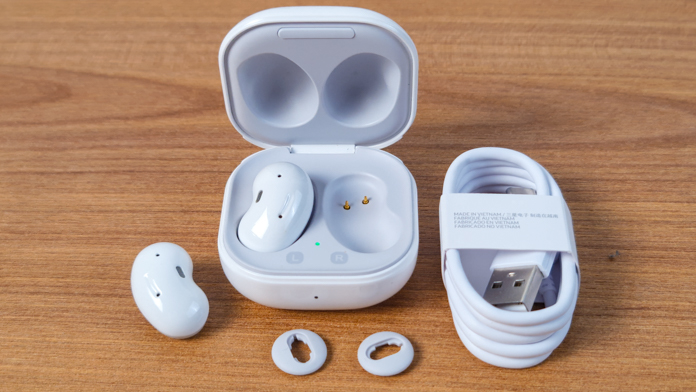 Take a closer look at the latter and appreciate the latter because losing the original will be much, much more difficult than ordinary round ones, but if you lose it, it will not be easy to find a replacement.

Let’s start our examination of the design with the most standard element that the headset has. I’m talking about the charging case. 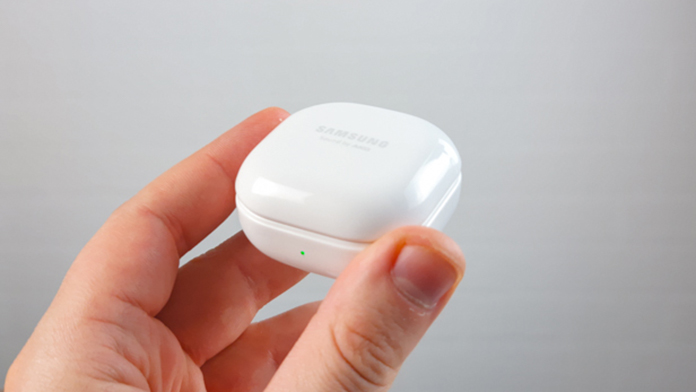 Rounded rectangle without sharp corners. Weighty, albeit plasticy in feel. 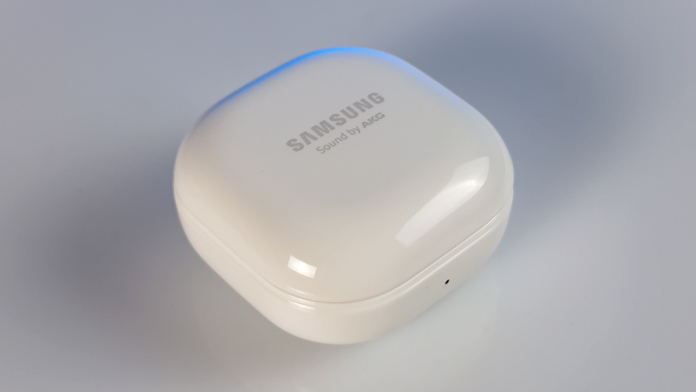 It consists of two parts – a massive base and a lid of a slightly lower height. 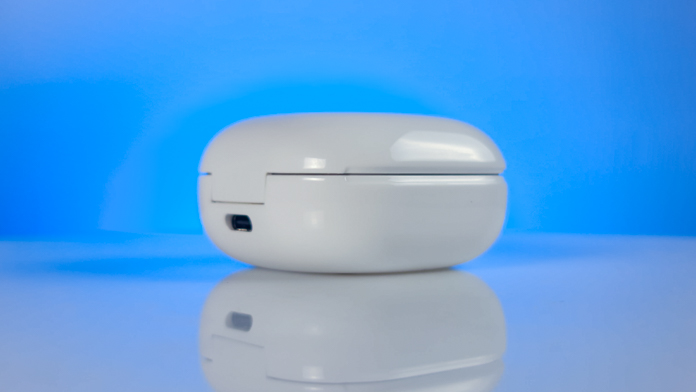 At the junction there is a notch with a cutout on both the top and bottom. Unfortunately, too small to pry with a finger and open the case with one hand. 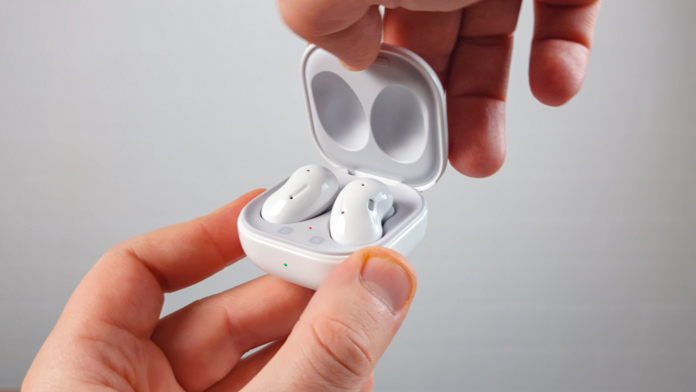 Above is the Samsung logo, as well as Sound by AKG. 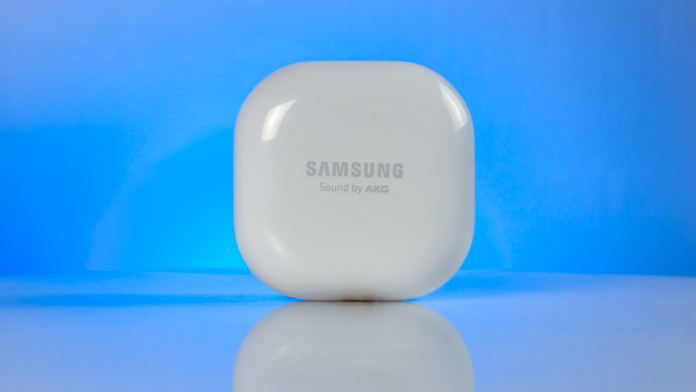 Below is additional information on certificates and so on. 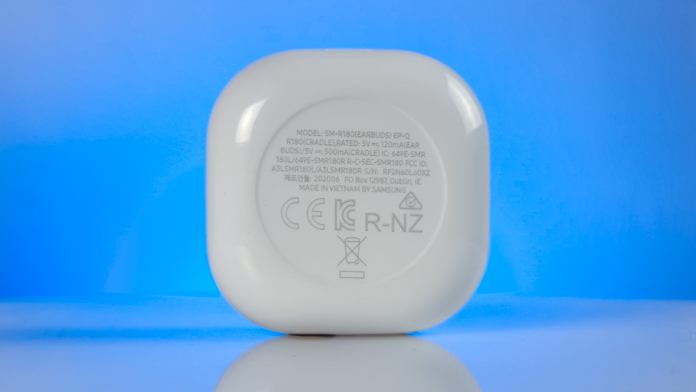 On the front is a work indicator. On the back is a Type-C connector. 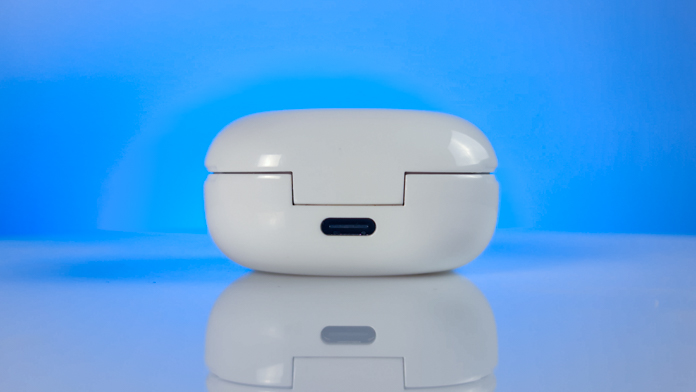 The case feels solid in the hands, nice and cool. And it supports wireless charging.

Samsung Galaxy Buds Live is a powerful blow in the gut to all the skeptics who have been telling us for years that the open-type TWS is doomed to be copying AirPods forever. Inside the case, beans rest in rough plastic trays. 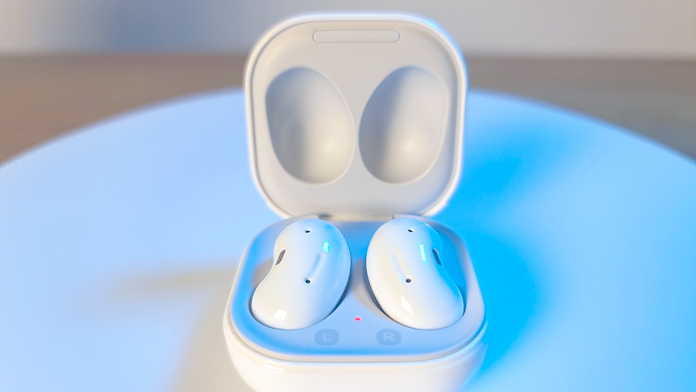 We conditionally divide their body into the upper, glossy half… 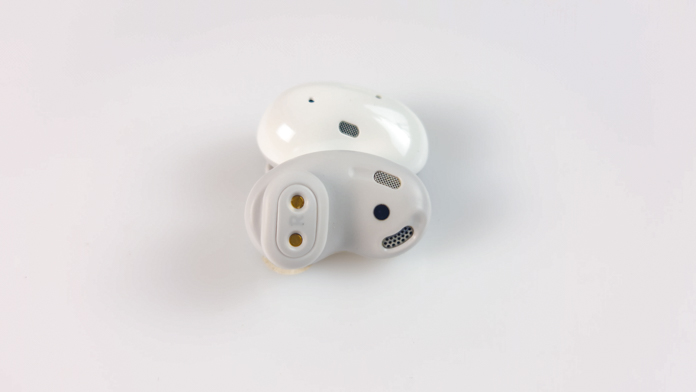 …and the bottom matte half. 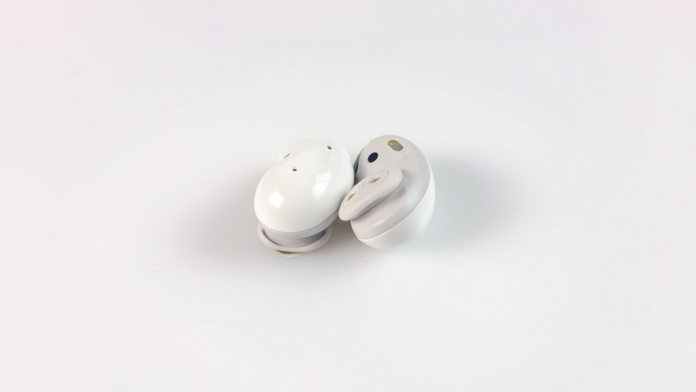 The glossy part houses two microphones and a tiny perforated metal area. On the matte part there are contacts for charging, an L/R indicator, a sensor output and areas with a speaker output. It’s funny that the removable ear cushion does not cover the speaker outputs but the protrusion with the charging contact. I don’t understand why this silicone rim is removable at all. 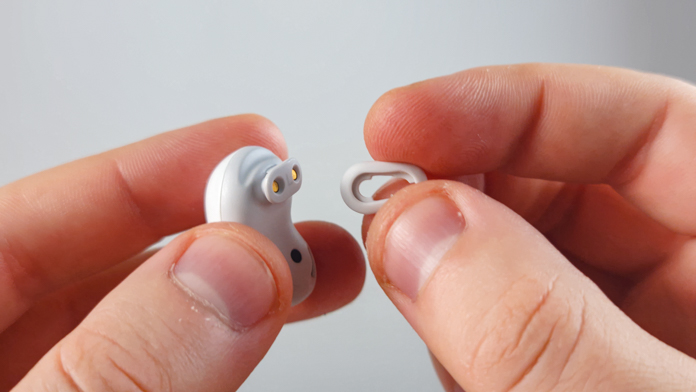 The sensations of the beans in the hands are pleasant. The gloss looks ceramic, not plastic.

The dimensions of the headphones are 16.5 x 27.3 x 14.9 mm, the dimensions of the case are 50 x 50.2 x 27.8 mm. Weight is 5.6 and 42.2 g, respectively. As it turned out, there are only three microphones for one bean. And this is very cool – you cannot create a high-quality active noise control without such a set. And microphones are necessary for voice transmission. There’s a Bluetooth version 5.0, with support for A2DP, AVRCP and HFP.

The main question is how, in fact, do they sit in the ear? They fit so well that I would love to give the engineer who created this ergonomic happiness a prize and a ticket to the Bahamas. 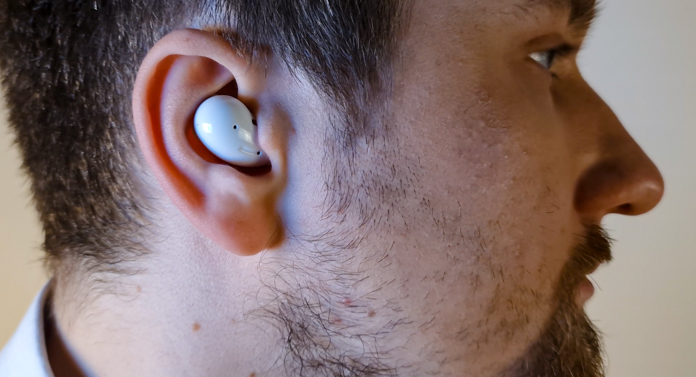 Buds Live fits perfectly into the auricle. But here’s the catch. They can fit perfectly… in different positions. Samsung recommends placing them slightly upward, and I also placed them below. This did not give me any advantages in terms of sound (except for one, I will return to it later) but the headphones fit tightly. So much so that even playing sports did not budge them.

Read also: Samsung Galaxy Note20 Ultra review – The Devil Is in the Details

The headset connects to smartphones quickly. With Samsung smartphones – very fast. We opened the case next to the smartphone, and an indication window appeared on the screen with the remaining battery charge. 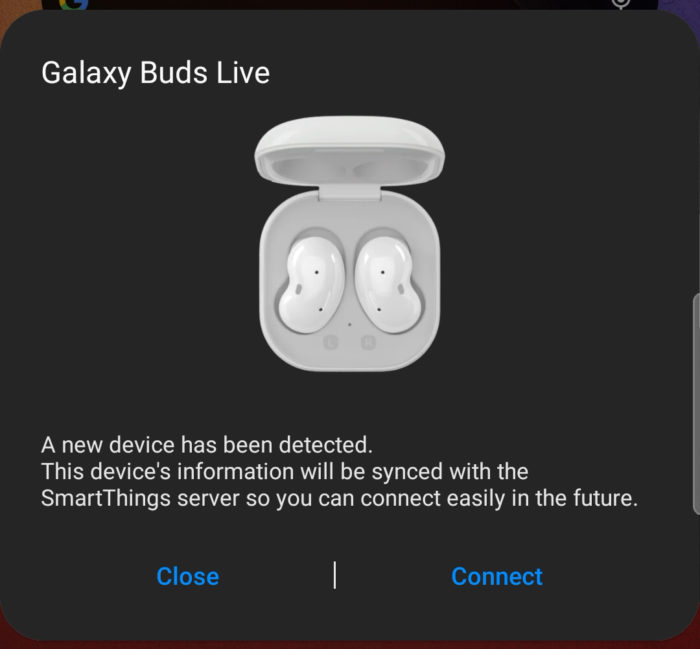 With other smartphones, pairing is carried out in the traditional way through the Bluetooth settings menu. In both cases, it’s better to install the Galaxy Wearable app, although if you have Samsung, then the download will happen automatically when connected to the headset. The app contains the entire array of Buds Live settings, and you can personalize it for yourself. 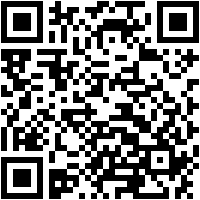 Galaxy Wearable has an equalizer with six presets, active noise reduction, control settings (single, double, triple and long press), launching Bixby (or another assistant), quick connection to devices with a Samsung account, game mode to minimize the delay and to reduce the sound pressure.

In the application, you can find headphones by sound signal – and for Christ’s sake, do not try to look for them while they are in your ears, the sound is very loud. In addition, you can update the software and perform a full reset.

And yes, in some reviews I read that Buds Live on non-Samsung smartphones is deprived of some functions. Perhaps. But I installed Galaxy Wearables on my LG V35 ThinQ, after connecting the headset, I installed a plug-in from Google Play and got functionality similar to the one that was paired with the Galaxy Note20 Ultra.

In terms of controlling music playback, you can experiment a little. Pause/play is one tap, next song and call is two taps, previous track is three taps, reject a call is long hold. 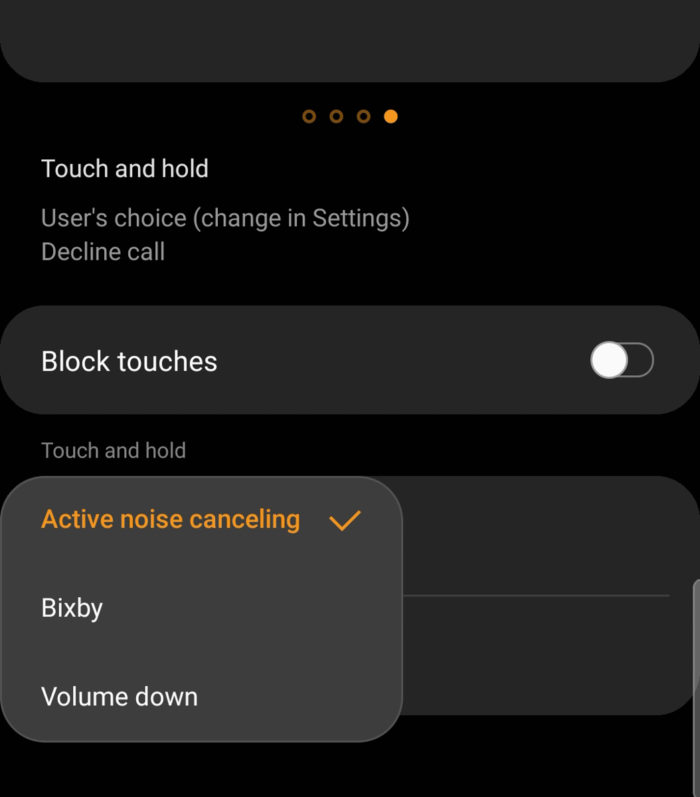 From all this, you can customize the additional functionality of a long press, Bixby, volume change or ANC. But the setting for each of the headphones is different, and thanks for that.

I have occasionally had problems where double taps were seen by the headphones as three taps and double taps were registered as single. At first I thought – the problem is that the headphones sit in the ear in an unusual way, but no, it happened no matter what. And yes, the firmware is the freshest. But in general, the control is adequate and works reliably. You just need to get used to it and the number of mistakes will be minimized.

Read also: Samsung Galaxy Note20 Ultra review – The Devil Is in the Details

About the noise control. It would seem that it should be powerful – three microphones, plus Samsung algorithms… But the problem most likely lies in the bean format. This is the essence of open-type in-ear headphones. They can not block all frequencies. 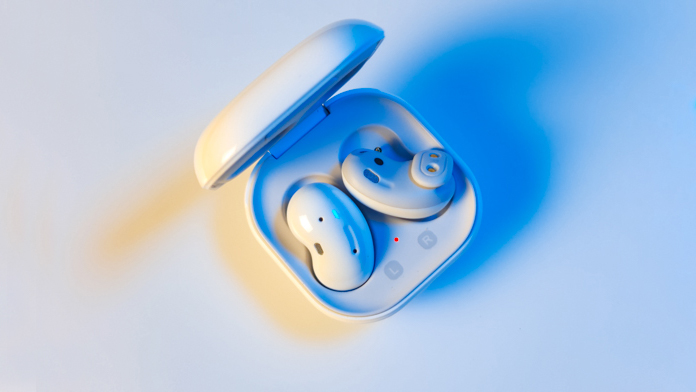 On the other hand, everything depends on the location of the earbuds in the ears. And again, the firmware update is the most recent, and I’m testing with the Samsung Galaxy Note20 Ultra. So the algorithms should try their best. The problem maybe in my ears, because some people actually praise the noise control in there.

There has also been confusion about the so-called bone conduction. At first I thought that these headphones are hybrids, and bone conduction is used to reproduce sound. But no, as it turned out, a special sensor on the inside of each earphone is used as an additional internal microphone. The so-called VPU technology, or Voice Pickup Unit, allows the interlocutor to hear you better in noisy environments.

For example, Huawei FreeBuds Pro has the same technology. But I don’t know its details and where to look for a description of the technology is also unclear.

Let’s talk about the sound. I am in no way an audiophile: I can tell when YouTube Music’s attempts to pass a low bitrate video as a normal song with good mastering, but I can’t tell a good FLAC from a good MP3.

And yet I’ve tried a lot of headphones, both expensive and cheap. And you know what? The Samsung Galaxy Buds Live headphones seemed to have opened my third eye. Not the third ear, but the third eye, because the sound quality made me see. 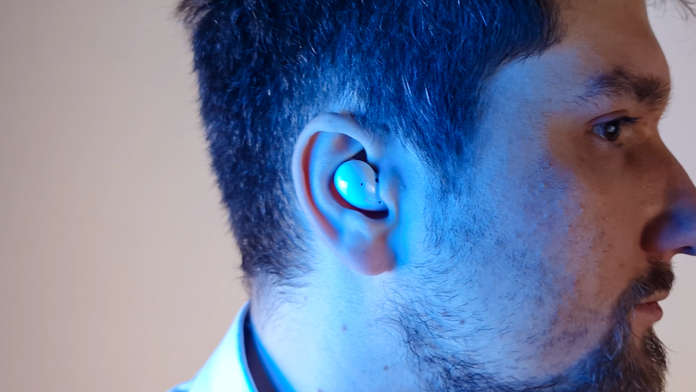 The bass is monstrously expressive, AKG works flawlessly. The treble is so clear that I heard new notes in the voices of the vocalists and such details of the instruments that I had never noticed before. The middle frequencies are also juicy and dense. The soundstage is not wide, but works along the line between the ears, and the detail is simply shocking.

A couple of times vocals, which clearly must go in the center of the stage, shifted sideways. But this happened due to improper fit of one of the headphones.

The manufacturer promises an average of 6 hours of music playback with ANC enabled. We can safely turn it off and expect from six hours to seven or even eight. And this is with 60 mAh in each of the headphones. And before I forget… Yes, the earbuds can work separately, one bean in the ear, the second in the case. 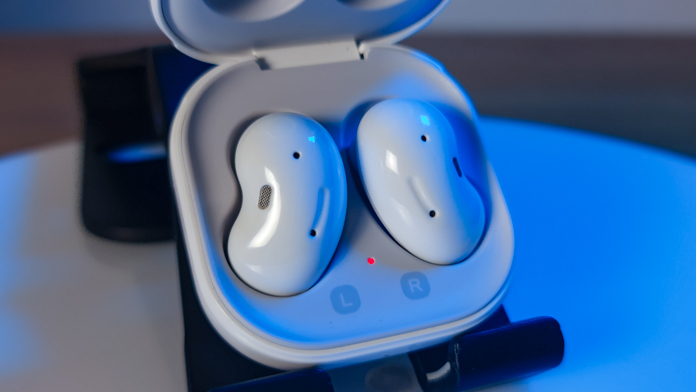 The case is equipped with an additional 472 mAh battery, which allows for three to four full charges for both earbuds. The case itself can be charged wirelessly – fortunately, Note20 Ultra and other models of flagship smartphones are often equipped with reverse wireless charging modules. And while charging the case, the headphones also gain charge.

In terms of speed the Type-C case charges 70-80% per hour, wireless is about as quick. Five minutes in a case equals an hour of music playback, and in half an hour you will provide yourself with music for almost the whole day. 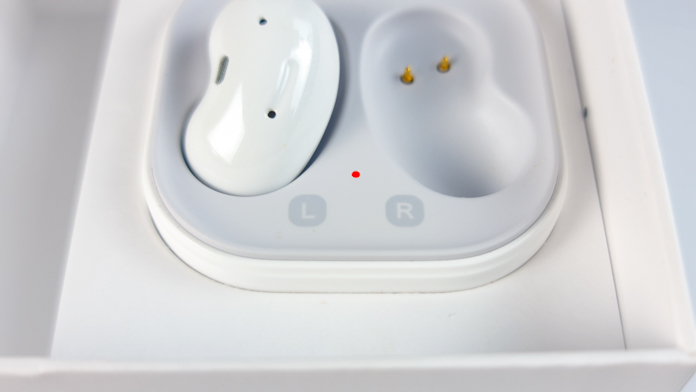 I noticed a little oddity – an inexpensive wireless charger from Rivacase charges the case, but an expensive and 50% more powerful one from Baseus charges it for exactly 20 seconds and then turns off. Although at first it charged it from start to finish. This is a problem that mainly concerns low-power devices, and even applies to power banks, but this is the first time I’ve come across this with wireless chargers.

The experiment was successful. The build quality, form factor, ergonomics, expressive and unique (at the moment) design – everything is in place. If you have the right shape of the ears, you will get a decent active noise control as well. The sound quality will be bombastic anyway. I highly recommend the Samsung Galaxy Buds Live, but please test the device in the store beforehand. Because unique things don’t suit everyone.