Releasing a small mini-version of a famous console was a great idea, but hardly an original one. We’ve already seen dozens of licensed consoles on the market for the last ten or more years – everything from SEGA Masters System to NES clones. It’s hard to understand what took Nintendo so long, but it’s finally here. Well, it was here at the end of 2016, and now it’s almost gone. You have to hurry in order to buy one – soon they’ll be very expensive. But while there’s still time, let me tell exactly what this thing is.

It’s a known fact that nostalgia is a business. Hollywood knows, game developers know it. A huge number of independent studios make their money by producing games in the style of the olden days. Remember the times, when tiny 2D sprites seemed like a big deal? A lot of classic genres are alive and well nowadays and many games successfully copy classic formulas to create popular and award-winning projects. Hollywood also creates such shows as Stranger Things; even Star Wars the Force Awakens copies the original film in terms of style and movie-making process. The eighties are back.

NES Classic Edition is authentic to a fault. It tries to be everything the original had been. It looks the part, it feels right, although your old cartridges won’t work – there’s no slot for them. I was shocked to see the return of cables – the long forgotten accessory to controllers. A minor thing, you might say, but it really ruins the whole experience. But let’s start from the beginning. 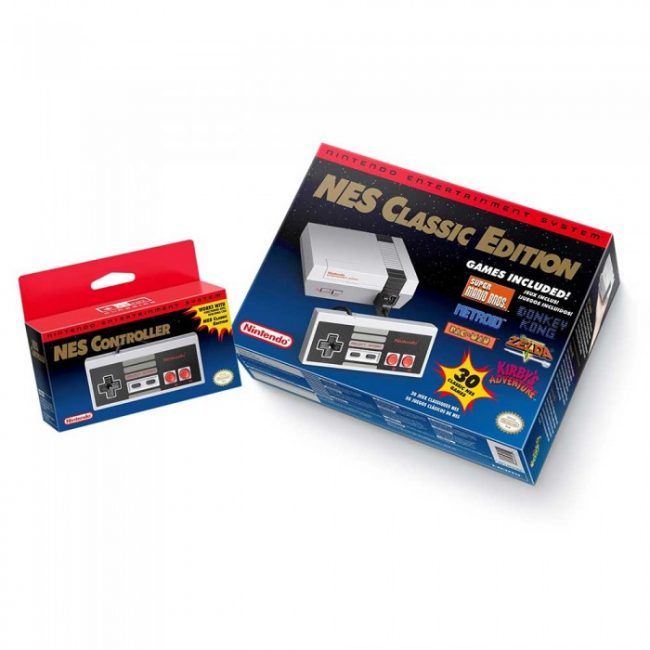 The console costs about 60 US dollars, and for that cost you get a lot of nostalgia. Whether you owned the original NES, or played with a friend or even had a clone, there’s something for everyone. 2 bucks per game is a good deal, especially when talking about Nintendo with their wild stance on game costs. As expected, the games are great and the video quality is outstanding.

So why should you buy the official stuff and not clones from other manufacturers? They, after all, offer more games and emulation options. Well, NES Classic Edition is not all about playing – it’s also about being a cute little toy. Yes, it’s a toy. A toy that looks dashing and plays a lot of great games. But in itself it is isolated. You can’t add more games or use your cartridges. Not officially, anyway. But as a toy it’s great. It looks exactly as the real thing and it works flawlessly. It also lacks any of the traditional problems of other “emulating machines” – the sound especially is excellent.

NES Classic Edition looks like a real American NES, only smaller. A LOT smaller. It’s hard to grasp just how tiny it is – just imagine the traditional NES controller. It’s not much bigger than that. Everything else looks great – even all indicators and buttons look and feel authentic. On the back we have two new slots for USB and HDMI. 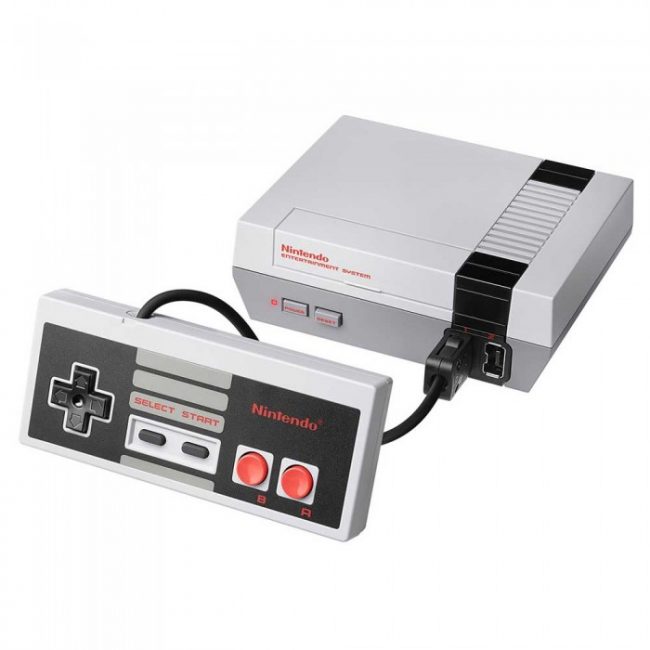 Among other changes are Wii connectors for controllers. Thanks to those you can use classic Wii controllers, if you have those.

The console looks completely the same, but don’t be fooled – there’s no slot for cartridges. It looks real, though.

Just as with the original console, there’s no fuss with installing updates. It’s plug and play – everything works right off the box. Just press the button and you can play right away.

When NES Classic Edition turns on, it’s a fast process – no longer than five seconds. There’s a simple menu where you can choose your game. Everything is simple and intuitive. There’s a big list of installed games. You can filter them by manufacturer, genre, name and type, but there’s really no need – there’s not that many games anyway.

The console itself looks great, but it’s not all – the games themselves look massively better than ever. It’s like a revelation. The previously blurry parts are sharp, colors are bright and pixels are clear. The games look better than on the original and Wii and Wii U. The Wii U outputs Full HD, but games themselves look plain bad. Not anymore – it’s as good an upscale as we could have hoped for. The situation is bizarre: for decades the best-looking versions of these games were only on PCs, where you had to illegally download them. Well, no more. Well, at least as long as these consoles are on sale. Then it’s PC again, I guess. Let’s hope other games will get the same treatment on Nintendo Switch.

If you care more about authenticity and not quality, then check out the video settings. You can choose different filters: pixel perfect mode lets you run games in native resolution, CRT filter imitates old TVs. These filters are not new – we’ve had them for years on illegal machines, but they have never looked that good. CRT filter is especially neat – unlike other clones, NES Classic Edition imitates not only the lines, but also other little things which distort your game to retro perfection. Objectively we make the quality worse, but it still somehow looks even better. 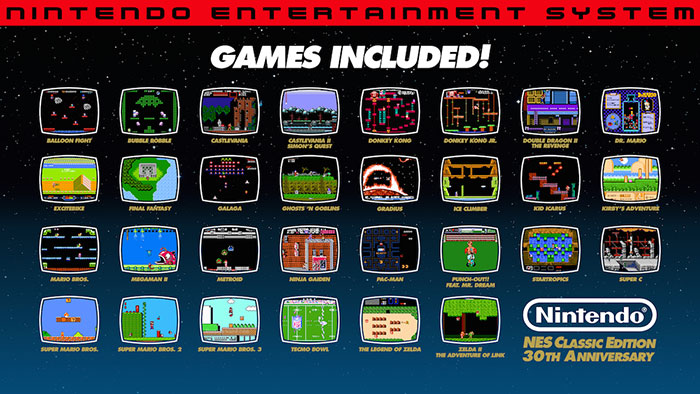 But that’s not all. Among other neat things are original instruction manuals from real boxes. They dropped a ball a little here: there are no manuals per se – they are stored online. In order to get them you’ll have to use your smartphone or enter URL manually on a PC. It’s really weird though – why couldn’t they put the real thing on the system’s memory? Some games are even unplayable without those, so Internet access and another devices are a must have in order to beat Startropics, for example.

Another new feature is called Suspect Points. It’s kinda like a bookmark for your games. Thanks to this addition you can save your progress at any time, even if the game originally didn’t allow it. Now you can leave your game at any time or save just before a tough boss. A handy feature, considering that some of these games are hardcore. It may seem like a cheat, but newer players will definitely appreciate it.

But not is all well with NES Classic Edition. Nintendo’s made some great decisions and blew the rivals out of the water, but some things here are downright unforgivable. Let’s start with the main one – cables. I like almost every aspect of the console, but when I finally sat down tried to play it I discovered a shocking flaw – the controllers. 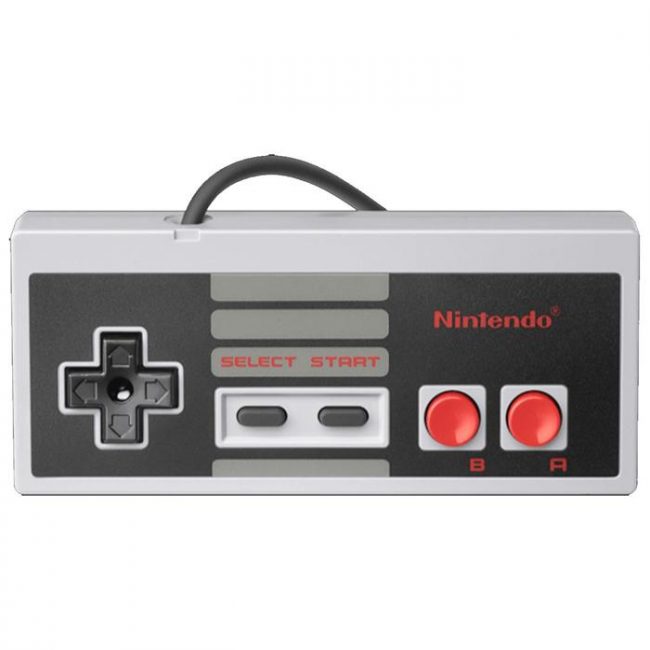 Now, the controllers themselves look fine. They are easy to use, especially if you grew up with them. But the thing is, they have cables. And not long ones either. See what I’m getting at? Because of those I was completely unable to play comfortably – they simply didn’t reach my couch. And thus I had to move to the floor. Sure, it reminded me of the times when I played like that all the time as kid, but I’m not a kid anymore! I want my comfort. And while the design is authentic, it completely ruins the whole experience for me.

It’s not only about comfort, either. NES Classic Edition is a console capable of outputting Full HD image with stunning results. But how can I enjoy these game in their new glory while sitting that close to the screen?

I can use Wii controllers, sure, but those have even shorter cables! But the absurdity does not end here. The Wii controllers have a home button – a button the original controllers lacked. I logically assumed that the button won’t work here – but no! But if it works, why not put it on your controllers? Because of this oversight you just have to have the console nearby in order to save your progress or access settings.  Such a silly but fatal slipup.

And so you have it. NES Classic Edition. A fancy toy or a closed console? It’s hard to say. You might want one, but not be able to say why. It’s a great present, but that’s about it. It’s not a wholly functional console because of the flaws, but it runs games perfectly. I honestly can’t say whether to love it or put in on a shelf and forget it. It was a massive success in the USA, but that’s mostly due to nostalgia. Still, it’s a nice piece of tech. 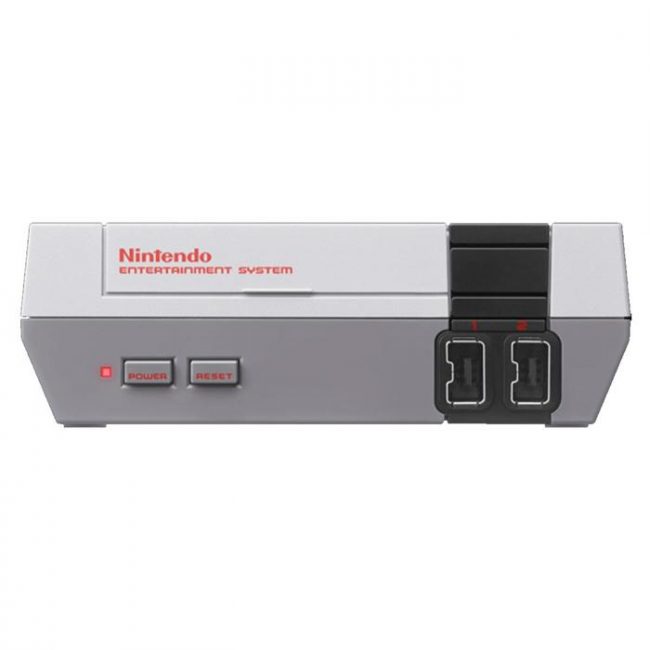 You may wanna think it through, but think faster – those babies are no longer being produced, which means that they are already a collector’s item. Europe still has them, but the USA is out of luck. Buy it for your collection, buy it for a friend or buy it to resell at a much higher price. Nintendo are masters of marketing, and even now gamers start to panic. So what are you waiting for?