Technical progress is cool. I’m always interested in looking at innovative things. But real revolutions in the mobile segment are quite rare, as for the introduction of something completely new the manufacturer must spend a lot of money and it is not known how the public will react to the novelty. Lenovo decided to take a risk and released their “revolutionary” first-born – a hybrid device called Lenovo Yoga Book and judging by the information I have, their risk was justified, despite the fact that the price of the tablet is quite high. 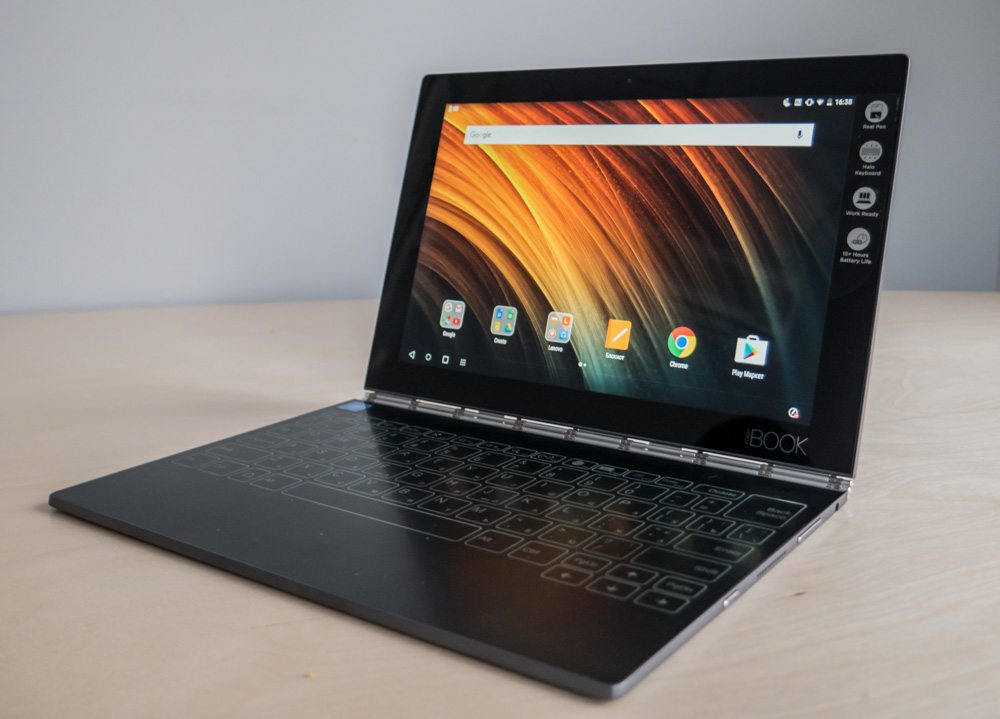 I rarely discuss the composition of the box in the reviews, because often inside the roughly the same set of cable and power adapter. But Lenovo decided to deal with the “poor” bundles. So, in the box we have a lot of interesting. The box itself is like a book, which corresponds to the name.

Opening the box, first of all you will see the tablet itself and the box containing the USB cable and power supply. A few words about the power supply, it’s not usual, but with support for fast charging. We remove the tablet and open the next “page”, – under it is hidden a corporate notebook with magnets. Under it we see two more boxes. In the right there is a clip for the SIM tray and a bunch of paper documentation. In the left – a proprietary stylus with three rods-handles.

In terms of appearance and design, Yoga Book inherited the traits of its older relatives – the ultrabooks of the Yoga series. In the Book is used the same reliable rotary hinge.

Thanks to the hinge, you can use the Yoga Book in four positions: a laptop, a console, a presentation and a tablet. But unlike most Lenovo ultrabooks, the body in the Book is plastic.

Also, the size of the tablet leaves a positive impression. In the closed state, the thickness of the Yoga Book is only 9.1 millimeters. And the mass of the device is only 610 grams, which is not much more than the average 10-inch tablet.

On the edges of the bottom of the device are all controls and ports. On the right side is the audio output, volume key, power button and speaker. 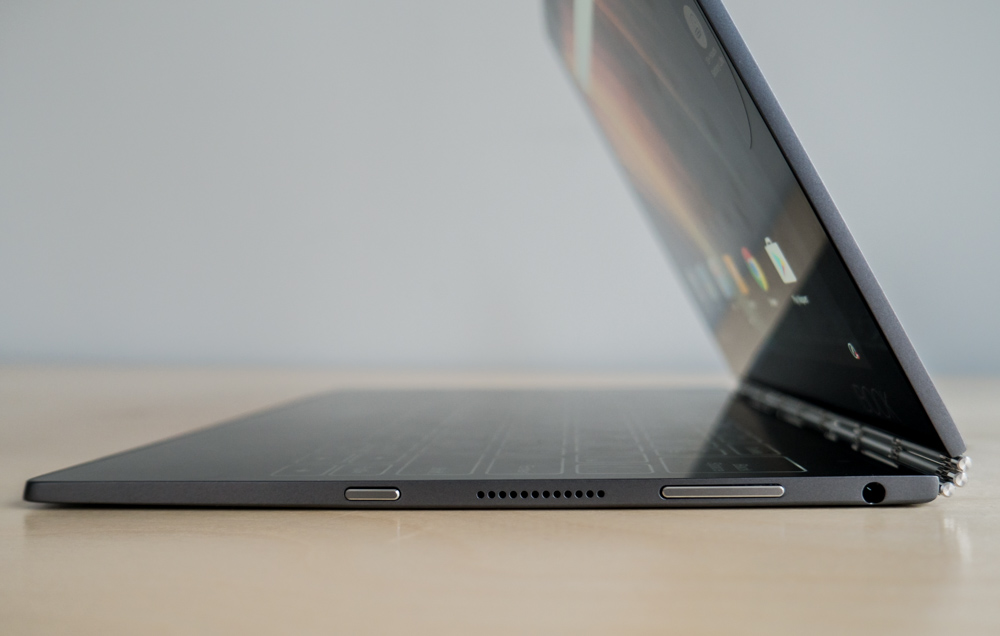 On the left side is Micro USB port for PC synchronization and charging, microphone, memory card tray (and SIM in version with 3G support), microHDMI port and one more speaker.

The upper and lower faces are completely identical. Only the logo of the company on the upper edge will help not to confuse them. Despite the fact that Yoga Book looks stylish, it obviously lacks at least small rubber feet from below. In notebook mode, Yoga Book is not very confident on the surface of the table.

Also worth noting the main problem of ergonomics of the device – when the tablet is on the table, it is almost impossible to open it. You just have nothing to lift the lid. Opening the Yoga Book in hands is also not very convenient. To do it without long fingernails is pretty hard.

The keyboard is the most interesting thing in the Yoga Book. In fact, it’s just one solid black touchpad. And when you turn on the keyboard mode – these virtual keys are highlighted. 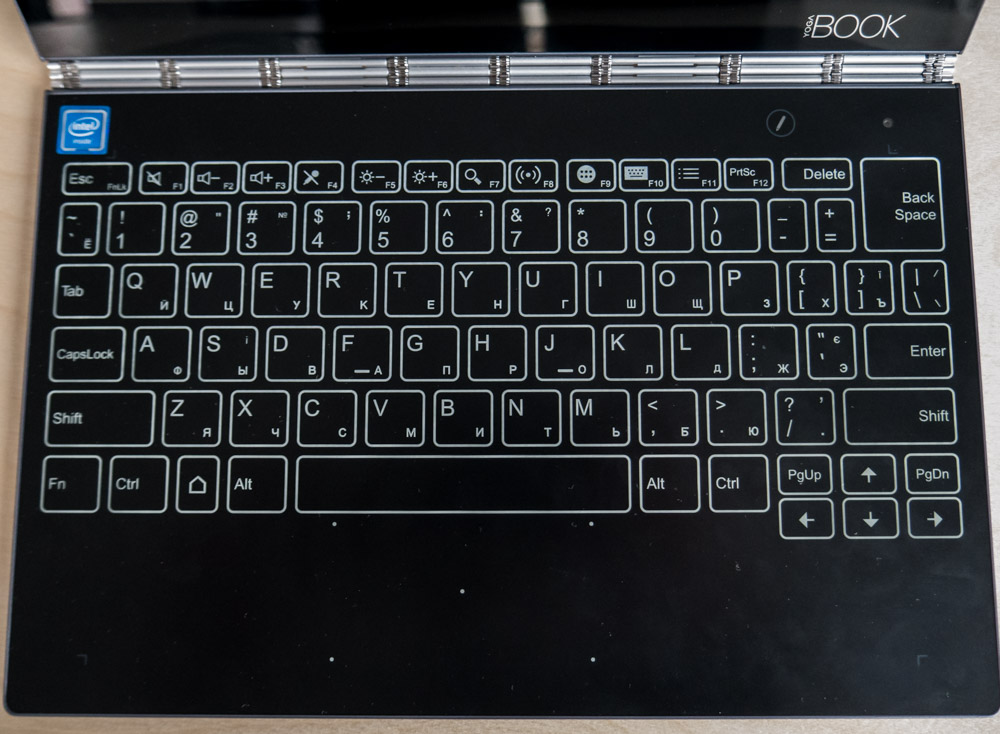 The keyboard is called “Halo” and it is slightly different in the Yoga Book on Windows and on Android. Android-version of the tablet came to us for a test, so the keyboard is made just for the green robot. There are familiar keys: home, back, application menu, search and so on. There are also Fn-keys familiar to laptops, with which you can adjust the sound, brightness, take screenshots and turn Wi-Fi on or off. Under the keyboard is a touchpad block. It’s bad that in the touch panel mode you can not use the entire panel, like one large touchpad. More precisely, it can be done, but only with the stylus. And I would like to be able to manage my fingers.

The keyboard is quite comfortable and you can get used to it in a couple of weeks. I was able to print on it even using the method of “blind typing”, but there are things that still prevent it. Some keys are slightly smaller than all the others, and you can easily miss. On the keys “F” and “J” there are stripes habitual for usual keyboards, but it is completely unclear why they are here. Despite the fact that the keyboard has a vibration feedback on pressing, this is not really enough.

As I said, the full touch panel (graphic tablet) mode works only with the stylus. At the corners of the bottom panel are small incisions that show the working area. The stylus itself resembles a conventional pen or marker, which makes it convenient to hold it in your hand. In this mode, you can conveniently work in graphic editors and in design applications. 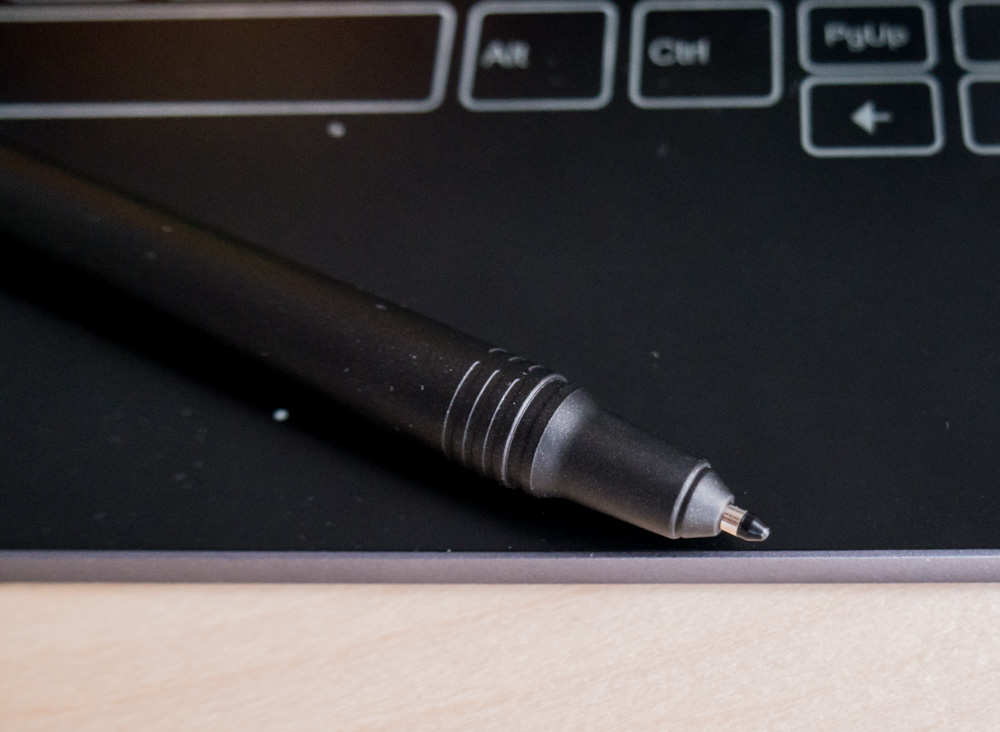 The presentation of the Yoga Book in Kiev was attended by a professional artist who easily created excellent portraits on the Android version of the “book”, which once again proves that it is not just a toy. Yoga Book was created for people who often work with graphics or draw. For these tasks, the ArtRage application is preinstalled on the tablet, which is very similar to Paint for Windows. But if its capabilities are not enough, in the Play Store there are a lot of applications to work with graphics.

Another feature of the stylus is replaceable rods. By default, the rod is installed to work with the touch panel, but in the set there are three interchangeable ballpoint pens. The change of the rod takes place with the help of the cap and is carried out in a few seconds. What is it for? Well, firstly, you get a good ballpoint pen, and secondly – remember the notepad that comes with the kit. With the help of built-in magnets, it is easily attached to the touch panel and when you write in a notebook, you simultaneously receive electronic versions of all your records stored on the device. For this purpose, a special application is installed in Yoga Book.

The pens themselves and the notebook are consumables and will be sold separately, however Lenovo does not yet say how much these consumables will cost. Notepad is more an image component, because the touch panel works with absolutely any notebook and just a piece of paper. But if you actively record with a stylus, the rods will have to be stocked up.

It may seem that all the trumps are already on the table. But no, Lenovo hid a couple more and it’s time to open the first one. The Yoga Book has a 10.1-inch display with a resolution of 1920×1200 pixels. The display itself is made using the AnyPen technology, so you can work with the screen with any conductive object (pencil, carrot and so on). 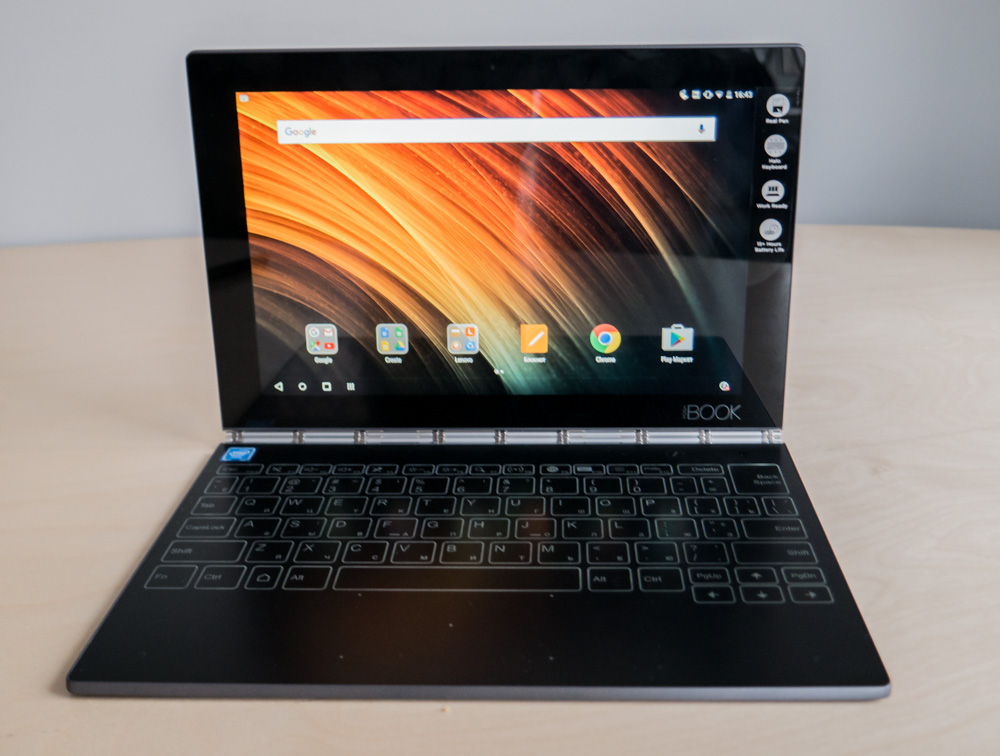 A little bit upsetting the quality of the oleophobic coating of the screen, it’s not the best here. The display itself is not bad, it is based on the IPS-matrix. The viewing angles are good, but the color rendition is a little lame. At some moments, colors are very saturated, and in some, there is a lack of color. The minimum and maximum brightness levels are at a decent level.

Despite the fact that our version of Yoga Book runs on Android 6, Lenovo tried to make the shell maximally Windows-like. All controls are shifted to the left edge, and from the bottom there is a panel of running applications.

Also, most applications support windowed mode, that is, they just open in a mobile state and in this mode you can work with several programs at once. Any application opened in the “mobile” form can be fixed on the screen, and it will always be displayed on top of other windows. Pleases the availability of applications that will help you learn how to correctly and professionally use the Yoga Book. The application “Lenovo Yoga Book” simply tells you what kind of device you have in your hands. “Quick Start Guide” – will acquaint you with the basics of working on the Yoga Book, and the “Tutorial” will help to fully reveal the potential of the device.

In terms of hardware Lenovo very seriously equipped the Yoga Book. The Intel Atom X5-Z8550 CPU (1.44-2.4 GHz) paired with the integrated Intel HD Graphics 400 is able to cope with almost any of the tasks. To understand the scale of all power, Intel HD Graphics 400 can safely pull on low graphics settings games such as BioShock Infinite, The Elder Scrolls V: Skyrim, Tomb Raider.

As for memory, we have 4 GB of RAM and 64 GB of permanent memory. And if this is not enough, you can use a microSD memory card up to 128 GB. In the Yoga Book there are LTE, 3G, Wi-Fi and Bluetooth available.

If the listed hardware has caused admiration from you, and you already imagine launching an orbital shuttle with the help of the Yoga Book, then synthetic tests will drop your spacecraft to the ground. In AnTuTu the tablet scored almost 69 thousand points, in Geekbench 4 – 1137 and 3186 points in the CPU test, and 4331 points in the GPU test. It can be seen that Android OS simply can not reveal the full potential of the processor and graphics.

Cameras in the tablet – a very incomprehensible thing. The presence of the frontal is fully justified. It is designed for video calls and the 2-megapixel front camera in Yoga Book is quite manageable.

But the main 8-megapixel camera is needed here “just in case”. If you do not have anything better to take a photo of a document or some important information – it can be usedd, but you should not count on more. Yes, and the location of the main camera raises questions. In the “laptop” mode, the main camera will be directed to the ceiling, as it is in the right corner of the keyboard. Controversial decision.

The Lenovo Yoga Book has a battery of 8500 mAh. According to Lenovo, Yoga Book can work 15 hours in the active mode. But this is more the case with the Windows version of the tablet, although there the results in practice are less than those declared. For the Yoga Book on Android, all the statements for autonomy should be divided by 2. The reason for all, again, is the poor optimization of Android for the used hardware and the dampness of the software.

Lenovo Yoga Book – a very interesting, but controversial gadget that solves most of my tasks, but it needs to get used to. Get used to the system, and most importantly – to the keyboard, and how to interact with it. But even getting along with the time with Yoga Book you realize that this tablet-transformer can not replace a full-fledged laptop or netbook. Rather, we see a device that can be used for quick work “here and now.” The main plus of the tablet – it’s compact, lightweight, stylish and does not take up much space in your bag. Ideal for use during trips on vacation or business trip.